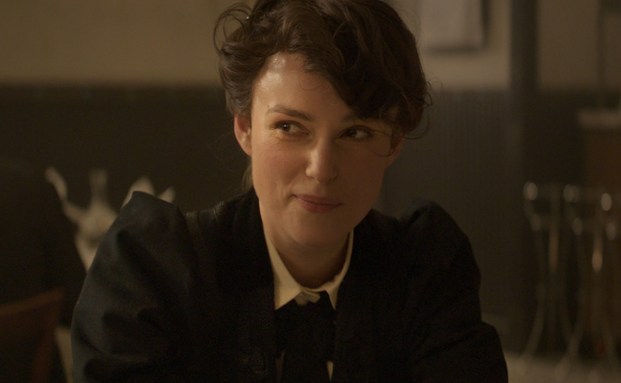 Every bit as sophisticated and visually stunning to look at as Gigi, the 1958 Best Picture Oscar winner that was inspired by one of Sidonie-Gabrielle Colette’s most famous works, this sumptuous biopic of France’s most famous female writer is a delicious treat for adult audiences looking for something worth their while.

It may be a very French story, but it has an all-English cast led by the luminous Keira Knightley. She plays the title star of Wash Westmoreland’s telling of Colette, about the farm girl from the French countryside who goes to Paris, marries raconteur and branding maven Henri Gautier Villars aka Willy (Dominic West), engages in sexual awakening on both sides of the aisle and finds a knack for writing even if her husband gets all the credit. As I say in my video review (click the link above), this is a wonderfully engaging and entertaining telling of Colette’s story, and it couldn’t be more timely in light of the #MeToo movement where women are finally taking their rightful place in the world, and getting recognition for it.

Westmoreland wrote the script with his late partner Richard Glatzer, who had a final dream to get this movie made, and Rebecca Lenkiewicz, whp brought in to give it a female touch. They focus on the unique partnership of this pair, as Willy gambles and whores his way around, always on the brink of bankruptcy but with a knack for marketing and selling ideas. That comes in very handy when one day, on the brink of another round with financial ruin, he comes upon Colette’s manuscript for Claudine, the saucy, thinly disguised story of Colette’s own youth that he first had rejected as unworthy of publication but suddenly sees the potential as he urges his wife to make it more salacious. It becomes a literary sensation with his name, not Colette’s, on the byline.

In that way it is somewhat similar to another current film, The Wife, in which Glenn Close stars as a woman responsible for the work for which her husband wins a Nobel Prize. Perhaps that contemporary story was inspired in part by Colette’s life — which, as shown here, also involves such very French dalliances first with a society woman named Georgie (Eleanor Tomlinson) with whom Willy also has an affair (separately, in a different kind of ménage et trois), and later a relationship with a lesbian named Missy (Denise Gough). That gives Colette the most satisfaction and expands her universe to the stage as well, where the author continues to play with society’s accepted norms and turn them on their head.

Knightley is just splendid in one of her best acting turns, invading the spirit of this pioneering female literary lion and lapping it up all the way. West is her match, perfectly realizing a man with no discernible moral compass or talent except to get his name in lights. Gough is especially appealing here as well, and the production values across the board are widescreen wonderful. This movie looks easily like several million more bucks than its indie budget ever allowed. It’s a real treat. Producers are Elizabeth Karlsen, Pamela Koffler, Michel Litvak, Christine Vachon, Gary Michael Walters, and Stephen Woolley. Bleecker Street puts it in limited release Friday.

Do you plan to see Colette? Let us know what you think.