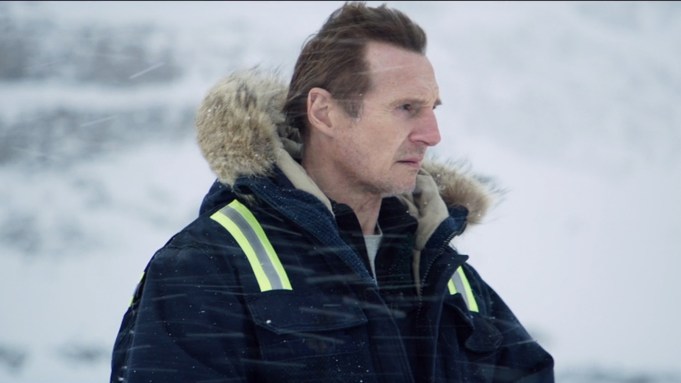 This week while out promoting his latest revenge opus, Cold Pursuit, Liam Neeson lit a controversy over actions he said he took 40 years ago by staking out black communities and random people in order to deliver payback for the rape of a female friend. The question by the journalist probably was a natural since, in what seems like his last 200 movies, he always is out to avenge bad things happening to his nearest and dearest. Just look at the list: The Commuter, Run All Night, Unknown, Taken, Taken 2, Taken 3, etc. What happened to the Neeson of Schindler’s List, Kingdom of Heaven, Kinsey and many others?

It has gotten so predictable that Neeson did an uncredited cameo in Daddy’s Home 2 parodying his current screen career with a fake Christmas movie called Missile Tow. The latest entry in the Neeson action canon feels a bit like a parody itself as he drives up a larger body count than in all those other movies combined. Taken as a black comedy, the very violent and darkly funny revenge picture Cold Pursuit is sort of amusing. It is based on a 2014 Norwegian film from Hans Petter Moland called In Order of Disappearance. Moland has now remade it for English-speaking audiences and Neeson devotees (Stellan Skarsgaard was the lead in the original), and the new version takes itself less seriously.

Neeson plays a Colorado snowplow driver named Nels Coxman (and you can imagine the jokes weaned from that name), happily married to Laura Dern, and father of a grown son. He even gets named Citizen of the Year in his small town of Kehoe. This idyllic life comes crashing down when his son becomes a victim of the drug wars between a Denver cartel run by cartoon villain Viking (Tom Bateman, chewing the white Rocky Mountain scenery) and a Native American gang led by equally scary White Bull (Tom Jackson). Coxman’s son overdoses at the hands of the bad guys, sending Dad’s marriage into a tailspin (Dern is in and out of this thing quickly) and has him contemplating suicide when instead the urge emerges to track down every single person remotely connected to this operation, starting at the bottom and swiftly travelling to the top (that would be Viking). As he dispatches each person in brutally different ways, we see him carry their bodies and toss them off the same mountain.

Among those trying to figure out what is happening is a police officer played by Emmy Rossum as if she had just watched Marge Gunderson in Fargo. With each death, a card appears onscreen with the name and religion of the deceased. There’s even a little side plot detailing two of Viking’s henchmen carrying on a secret affair with each other, demonstrating the off-the-wall nature of these proceedings.

Despite the large cast, this is Neeson’s show, and though the genre is getting tired, Moland’s treatment is at the very least different and irreverent. Neeson plays it straight, and his fans should be pleased if they bother to show up after all the bad publicity this week. He’s the new Charles Bronson, who reignited his career after vigilante drama Death Wish took off and he became the go-to guy for lots of movies just like it. That’s the blueprint here, and Neeson is the natural successor, at least until now. Frank Baldwin did the script. Finn Gjerdrum, Stein B. Kave, Michael Shamberg, Ameet Shukla are producers. Lionsgate opens it today. Check out my video review above with scenes from the film.

Do you plan on seeing Cold Pursuit? Let us know what you think