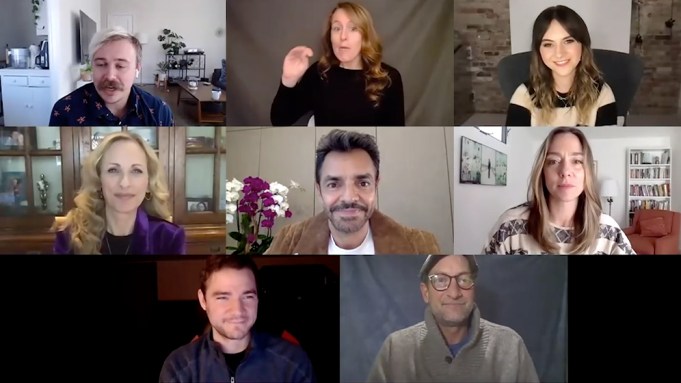 When Oscar winner Marlee Matlin read the script for CODA, she immediately fell in love. “I told [writer/director Sian Heder] probably a hundred million times that, ‘I need to be in this movie, I must be in this movie, I have to do this movie,’” she recalled recently, while sitting down with her director and co-stars at Deadline’s virtual Sundance Studio.

Based on the French film La Famille Bélier, the comedic drama tells the story of Ruby (Emilia Jones), a CODA (or “child of deaf adult”) who serves as an interpreter for the members of her Boston family. At a pivotal moment in her life, the character finds herself torn between the role she plays, in connecting her loved ones to the outside world—above all, with regard to their fishing business—and her pursuit of an education in music.

When Heder was first approached for CODA by producers Patrick Wachsberger and Philippe Rousselet, the idea was to remake the film for an American audience, while filtering it through the prism of her experience, and her own point of view. “I thought the premise of the original film was very interesting, but also there was an opportunity to set it in a world that I knew really well. I grew up in Boston, and I knew the fishing community there a little bit. So, I was very excited about those possibilities,” she said. “And also, to tell a story that I felt was very universal—about a girl coming of age, and trying to separate from her family—but also that was very culturally specific. [I was] excited to tell a story about a family that we normally don’t get to see on screen.”

Certainly, for deaf actors including Matlin, Troy Kotsur and Daniel Durant, the notion of crafting an in-depth, authentic portrait of deaf culture was a powerful draw. “What CODA’s so great about is, there’s the deaf culture, and there’s also [the] CODA themselves, who have hearing culture and deaf culture, and have a journey between both worlds,” says Durant, who plays Ruby’s brother Leo. “It’s nice to see all of those worlds together.”

“I thought the way Sian represented this family was so beautiful, and I loved that Ruby [is] an interpreter for her family. That meant that I would’ve had to have learned ASL [American Sign Language], how to work a fishing boat and how to gut fish,” Jones adds. “I’d never had a singing lesson before, too, so I knew that if this was a project that I was lucky enough to be able to do, it meant that I had to learn a lot of skills. That really drew me to the project because I love a challenge.”

Like Jones, Heder made the effort to learn ASL in the course of making the film, and to the deaf actors involved, this meant a lot. “It’s not often where you see directors that really take the time to learn sign language,” says Kotsur, who plays Ruby’s father, Frank. “She really cared about the movie and the script, and that really brings out the best.”

“It meant the world to us, not just as a director saying, ‘Hey, I’ll use an interpreter.’ She really made a point of working with us, one on one—first learning to sign, and even talking with us before having the interpreter there,” adds Matlin, who portray’s Ruby’s mother, Jackie. “She wanted to make the connections with us, as actors who use sign language.”

Portraying Ruby’s impassioned music teacher, Bernardo Villalobos, Eugenio Derbez, too, praised Heder for the work she put in, to understand a world that’s not her own, as well as the overall level of craft she brought to the project. “I think that Sian has an amazing sensibility,” he said. “She is definitely one of the best directors I’ve worked with in my entire career.”

With regard to her education in ASL, Heder couldn’t take credit without recognizing the contributions of two “ASL masters” involved with the production, Alexandria Wailes and Anne Tomasetti, who helped her adapt the script into ASL. “I wrote the script in English, and ASL is not translated English. It’s its own language entirely, [with] its own grammar, syntax and a culture that goes along with it,” she explains. “I knew what I didn’t know, and I came in and had amazing deaf collaborators, and felt like I was able to be the conduit to bring this collaboration together. But I certainly wouldn’t have been able to make this film without the collaborators that I had.”

In conversation with Deadline, Matlin, Kotsur and Durant also discussed strides that need to continue to be made, in terms of representation of the deaf community on screen. For Matlin, the crucial first step in authentically portraying this community is to cast deaf actors in deaf roles. “In terms of stories, I think we’ve seen that era gone past where deaf people are playing victims. [We need to have] deaf actors, like we did in this film, carry the film—not play secondary or third-rate roles film—and play professionals, play a variety of characters, because they are out there.” she said. “There are deaf lawyers, deaf teachers, deaf doctors. I’d like to see the trend that this began continue.”

“You have to think a little bit outside the box and present more opportunities, instead of just having two options,” Kotsur added. “You know, you write this script because somebody’s deaf, or I’m writing it because it’s a character that happens to be deaf. There’s a distinction there.”

Also starring Ferdia Walsh-Peelo, CODA premieres tonight at Sundance at 5 PM PST. For more from our conversation with the director and stars of the musical drama, take a look at the video above.