Continue to Deadline SKIP AD
You will be redirected back to your article in seconds
Skip to main content
December 9, 2021 8:00am 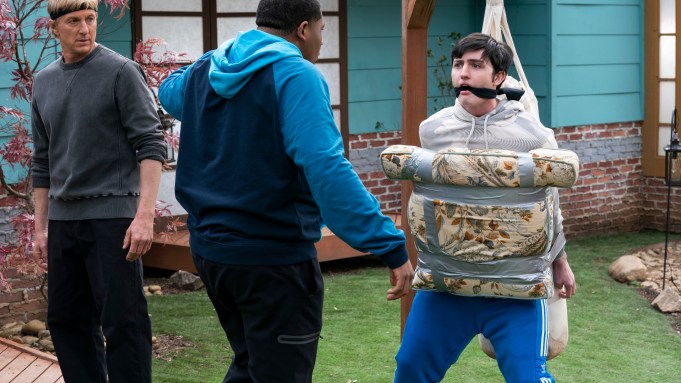 “If Johnny and I can actually work together and we win, Cobra Kai will be out of business.” So says Ralph Macchio’s determined Daniel LaRusso at the beginnning of the Season 4 trailer for Netflix’s Emmy-nominated series Cobra Kai. Netflix also unveiled some first-look images of the upcoming season (see below) premiering Dec. 31.

Cobra Kai takes place over 30 years after the events of the 1984 All Valley Karate Tournament with the continuation of the inescapable conflict between Daniel LaRusso (Macchio) and Johnny Lawrence (William Zabka).

Season 4 finds the Miyagi-Do and Eagle Fang dojos joining forces to take down Cobra Kai at the All Valley Under 18 Karate Tournament… and whoever loses must hang up their gi. As Samantha (Mary Mouser) and Miguel (Xolo Maridueña) try to maintain the dojo alliance and Robby (Tanner Buchanan) goes all in at Cobra Kai, the fate of the Valley has never been more precarious. What tricks does Kreese have up his sleeve? Can Daniel and Johnny bury their decades-long hatchet to defeat Kreese? Or will Cobra Kai become the face of karate in the valley?

Season 5 is in production.

The first three seasons of Cobra Kai are streaming on Netflix.