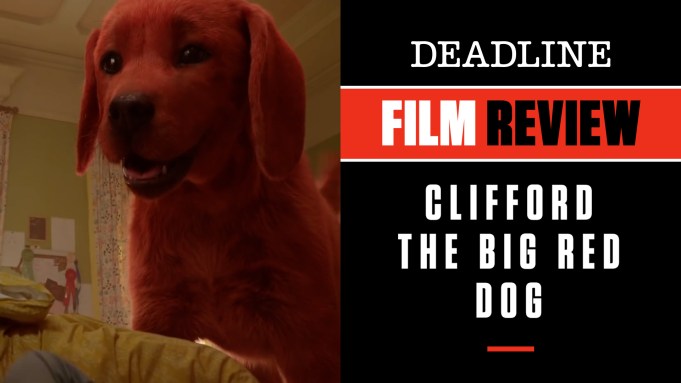 When Paramount’s Clifford the Big Red Dog was announced as an official selection of the Toronto International Film Festival, eyebrows were raised. This kind of film doesn’t normally get that kind of prestigious slot. Due to other circumstances, it eventually was pulled, but TIFF’s loss is your kid’s gain.

Paramount is opening the CGI/live-action pic Wednesday in theaters in a day-and-date blitz with streaming on Paramount+. Seems right, though I think it would be more effective in a theater as it is the kind of child crowd-pleaser that benefits from a roomful of infectious laughter. And kids certainly are going to get a kick out of this incarnation of the infamous bright red dog who measures 10 feet by 25 feet.

A lot of the humor, of course, is based on the high jinks created by Clifford’s sheer size, but thankfully this canine is as sweet as the puppy he starts out to be before magically ballooning literally overnight. Fortunately, director Walt Becker (Alvin and the Chipmunks) and screenwriters Jay Scherick, David Ronn and Blaise Hemingway resisted the urge to make him talk like Scooby-Doo, so despite his dimensions, he will remind you of your own beloved pet, and that makes this a harmless, sometimes amusing enterprise that doesn’t completely sail over the top.

Clifford has been in the hearts of minds of generations of kids since the popular book series began in 1963. A PBS series and even a previous animated feature have kept him a favorite, but this is the first big-screen live-action/CGI  attempt and it offers up a few doses of genuine charm, along with some pithy lines generally given to British comic Jack Whitehall (Jungle Cruise), who is a highly welcome presence, at least for adults dragged to this by their young ones.

Plot-wise it is all pretty thin: After a lovely and whimsical opening narrated by the great John Cleese, who plays a mysterious Mr. Bridwell, a magical proprietor of an animal-rescue home where he encounters Emily Elizabeth (Darby Camp), a spunky young teen who too often is put down by classmates at her Harlem private school. With her mother away on business, she is under the supervision of her Uncle Casey (Whitehall), a fumbling but engaging guy who finds himself dealing with a new family member — yes, Clifford. Emily and Casey first spot the dog at Bridwell’s, but to the Emily Elizabeth’s surprise, Clifford stows away in her backpack. Within a matter of hours the dog gets huge — apparently because she loves him too much — and Casey freaks out.

Most of the rest of the film finds Emily Elizabeth, Casey and friends reacting to this development as the inevitable villain turns up in the form of Tiernan (Tony Hale), a tech CEO with malicious plans to create some excessively sized food. He claims Clifford actually belongs to him and escaped from his lab. He sees great marketing possibilities with the help of this, uh, unique animal. But is he barking up the wrong tree? You can only guess.

The likes of David Alan Grier, Russell Peters, Horatio Sanz and Paul Rodriguez are among those in and out of all the shenanigans, but the real MVPs here are Whitehall and the CGI artisans who make Clifford as fetching as he is.

Producers are Jordan Kerner and Iole Lucchese. Check out my video review at the link above with scenes from the film.

Do you plan to see Clifford the Big Red Dog? Let us know what you think.