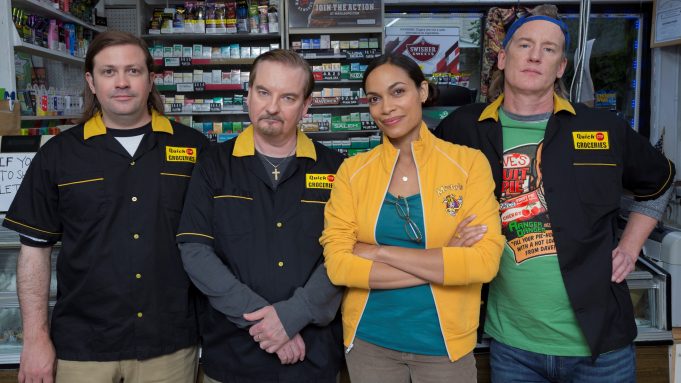 Kevin Smith today unveiled the first trailer for his anticipated threequel Clerks III, which Lionsgate will release exclusively in theaters for two nights only this fall, in partnership with Fathom Events. The film will be presented in more than 700 U.S. theaters at 7:00 p.m. local time on September 13th and 15th, along with an exclusive look behind the scenes featuring Smith and his cast. Smith will also be taking the latest installment in his franchise on a ‘Convenience Tour’ roadshow which kicks off in New Jersey on September 4th and will run through October.

Clerks III is billed as the final film in the series that kicked off Smith’s filmmaking career at Sundance in 1994, leading to his storied Hollywood run. It will pick up with Randal (Jeff Anderson) following a massive heart attack, as he enlists fellow clerks Dante (Brian O’Halloran), Elias (Trevor Fehrman), Jay (Jason Mewes) and Silent Bob (Smith) to make a movie immortalizing his life at the convenience store that started it all. Liz Destro and Smodco’s Jordan Monsanto produced the pic written and directed by Smith, in which Rosario Dawson will also star.

“Clerks III is the definition of event cinema, especially if you are a Kevin Smith fan or a maven of independent cinema,” said Lionsgate’s EVP of Acquisitions & Co-Productions, Eda Kowan. “This film rounds out the story that started a revolution in filmmaking. And to bring it to the fans on the big screen, there is no greater partner in the world of event cinema than Fathom Events.”

“Fathom Events is excited to partner with exhibition in hosting possibly the most loyal fan base in movies for this very special event,” added Fathom Events CEO Ray Nutt. “We’re proud to work with Lionsgate and Kevin Smith to bring the beloved Clerks story full circle.”

Smith dropped the Clerks III trailer and release date announcement this morning via an Instagram Live, which also saw him speak with cast members O’Halloran, Anderson and Mewes. Watch the film’s trailer above.