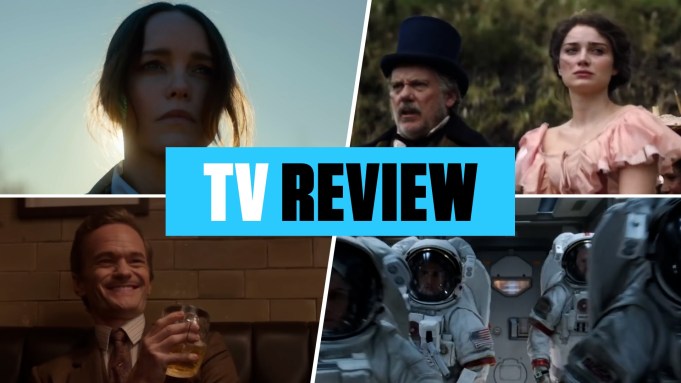 The miniseries known as the second impeachment trial of Donald Trump is expected to wrap up on or near the Presidents’ Day holiday, but there are plenty of other timely offering this Valentine’s weekend on the small screen.

Each moving in their own way, one is the show that you have to watch this week – a heart-shaped gift of sorts you can unwrap in the video review above.

Straight out of Silence of the Lambs, tonight brings the debut of Clarice on CBS.

The Alex Kurtzman and Jenny Lumet created and produced series stars Rebecca Breeds picks up a year or so after the events of the 1991 Oscar winning movie. Still trying to process the horrors of the Buffalo Bill case and her relationship with Hannibal Lector (who is nowhere to be seen or heard here due to rights issues) and the notoriety that ensued, FBI agent Clarice Sterling is pulled back into the field. A field that not only includes the world of serial killers and other predators, but rampant sexism at the Bureau and the cutthroat arena of DC politics.

Elizabeth Klaviter EPs Clarice and serves as showrunner. Klaviter and Lumet executive produce with Secret Hideout’s Kurtzman and Heather Kadin. Aaron Baiers is a co-executive producer on the CBS series – which dropped one last trailer at the Super Bowl this past weekend along with the Queen Latifah reimaging of The Equalizer.

In another blast from the past, AppleTV+’s space race drama For All Mankind is back for its second season on February 19. Already renewed for a third season, the alt-history series created by Battlestar Galactica boss Ronald D. Moore, Matt Wolpert and Ben Nedivi moves the battle for space to the 1980s this cycle. As in real life, Ronald Reagan is President and the Cold War the USSR is getting very hot, but on lunar rather than just global landscapes.

Also taking us back to the 1980s is HBO Max’s It’s A Sin, which launches on February 18

Set in London, the five-parter from Queer As Folk creator and A Very English Scandal scribe Russell T. Davies focuses on a passionate group of friends aiming to live their best and freest lives in their Pink Palace apartment. Against the backdrop of the Thatcher Era, the pals live through joy and tragedy as the AIDS epidemic decimates the gay community

Also making a big splash on the other side of the Atlantic, the Eva Green, Eve Hewson and Himesh Patel starring The Luminaries is set to debut on Starz in America on Valentine’s Day.

Adapted by Eleanor Catton from her 800-page Man Booker prize winning 2013 novel, the six-parter lands Hewson’s Anna Wetherell right in the middle of 1860s New Zealand and its gold rush to begin a new life. Needless to say, a few chance meetings here and there, a bit of the mystic arts betrayal, opium, racism and more, and things don’t quite go as planned.

So, as we head into the end of the former Celebrity Apprentice host’s latest impeachment trial, Valentine’s Days and the Presidents’ Day holiday, which one will be the show you have to watch? Watch the video above to discover the answer.