Continue to Deadline SKIP AD
You will be redirected back to your article in seconds
Skip to main content
March 18, 2021 5:28pm 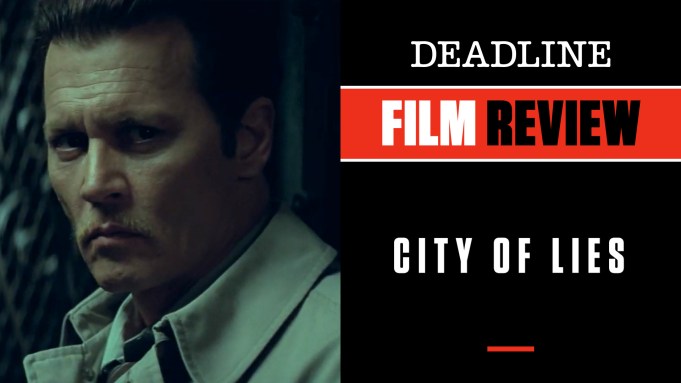 Well, it has taken quite a long time to get here, but the troubled production and distribution path for City of Lies is over, and the true-life drama starring Johnny Depp and Forest Whitaker about the two-decade investigation into the Notorious B.I.G.’s 1997 killing finally can be seen. The film, which sparked a lawsuit between Depp and a location manager over an alleged fight on the set and later became a victim of the financial woes of original distributor Open Road and then Global Road, originally was set for release in 2018 but only now will hit theaters Friday via Saban Films followed by a VOD debut on April 9.

Depp — who, since making this film, probably has been better known for headline-making court cases as recently as today — is still, as this movie reminds us, a pretty fine actor when given a role worthy of his talents. So taking the personal woes aside, City of Lies is worth seeing not only for a measured and unaffected turn by Depp as Russell Poole, the veteran LAPD cop who spent 18 years trying to uncover the mystery of who killed rapper the Notorious B.I.G. aka Biggie Smalls aka Christopher Wallace, but also for Whitaker’s understated and well-pitched portrayal of a journalist trying to escape his own checkered past by also getting to the bottom of what really happened.

Spanning two distinct time periods including 1997, when the killing happened, and 2015, when Whitaker’s reporter Jack Jackson comes into the picture to team with Poole in further exploring the cold case, director Brad Furman’s trajectory of events sometimes becomes jumbled but still holds power on different levels in the complex telling of facts and theories. Christian Contreras has based his screenplay on Randall Sullivan’s exhaustively researched book LAbyrinth, which began as a Rolling Stone article on massive corruption by the LAPD in the Rampart scandal but instead morphed into how all that diseased culture mirrored the B.I.G. killing and its connections to the unsolved killing of another rapper, Tupac Shakur, the year before. It is a complicated web — also involving another incident where a white cop killed a black cop — with clear villains in the LAPD, a long-running attempt to cover up the B.I.G. killing and efforts essentially to ostracize and silence Poole’s near-obsessive quest to get to the truth of it all.

Whitaker’s Jack Jackson is a fictionalized character but inspired by Sullivan, whose dogged reporting opened the can of worms let loose here and fueled Poole’s continuing work until he died in 2015, retired from the LAPD but still hoping to find closure. Furman’s movie picks up the pieces, as it were, with help from Poole’s widow in developing the facts used here, and the director, best known for his hit legal-eagle flick The Lincoln Lawyer, has found a way with the intriguing relationship forged between Jackson and Poole, two damaged men still on a mission, to tell it all somewhat cohesively. Certainly it is not easy to make a definitive movie of a high-profile case that still has not been solved, especially when your main protagonist dies just as you are getting started, but Furman and Contreras do an admirable job trying. In some ways, you might think this is the kind of material that would have ignited a director like Sidney Lumet’s passion, and Furman is no Lumet, but it is still well worth telling and well worth — finally — watching, thanks in large part to earnest and dedicated work from its stars as well as a fine supporting cast moving in and out of the action.

Producers are Miriam Segal, Paul Brennan and Stuart Manashil. Check out my video review with scenes from the movie at the link above.

Do you plan to see City Of Lies? Let us know what you think.