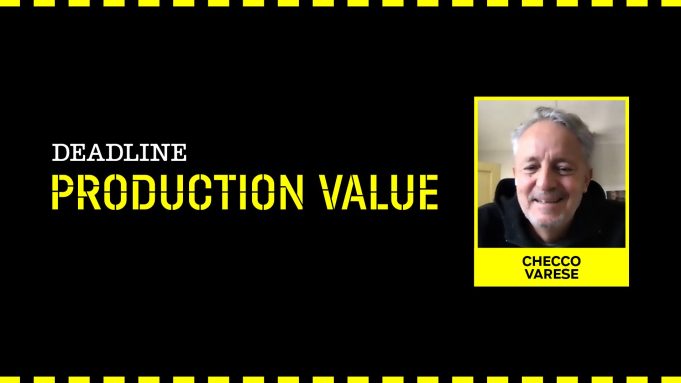 When cinematographer Checco Varese first met with Little Marvin about his first TV series, Them, he was intrigued by the creator-EP’s personality, “passion and…freshness,” and the compelling vision he laid out for the horror-drama.

“He said, ‘I want this to be a classical 1950s movie, seeing through the eyes of 1970s camerawork like The Conjuring, The French Connection, with the tricks and the emphasis in camera language of music videos, and the technology of the 21st century,’” Varese recalls. “That blending of styles was fascinating to me.”

Of course, another key facet of the project that made it an instant draw was what it was looking to explore through a horror lens. “The big impact was…that the horror is not necessarily related to the actual creatures or entities that the [show] had. The horror is related to what is outside, what is the reality,” he explains, in the latest installment of Production Value. “To me, that was the calling card. I said, ‘I want to do this because of the political situation we live in, and what we can actually push forward as an example of what not to do in life.'”

The Amazon anthology’s first season is set in 1953, following a Black family that relocates from North Carolina to an all-white neighborhood in Los Angeles. Following their move, they are met with evil forces, both in their community and within their own home, that threaten to taunt, ravage and destroy them.

Interestingly, while Varese has shot his fair share of horror films and series, from Prom Night to Guillermo del Toro’s The Strain to It Chapter Two, he considers himself neither “a horror specialist” nor “a horror fan.”

“I don’t watch horror movies,” he admits. “I get scared.”

Still, what’s obvious in speaking to him, and in examining his work, is how deeply he understands the genre, and how much command he has, as someone working within in it. “Horror is like an algorithm. It either [works] or doesn’t work,” he says. “If the door opens a brief moment too early, horror disappears, and it becomes a Home Depot commercial about hinges that need WD-40. But if you open it at the right moment…it’s pure math.”

In his appearance on Production Value, Varese explains how he helped execute a “surreal, intense” sequence in Episode 3, involving a bus set up for production within a virtual environment. At the same time, he breaks down his trajectory as an artist to this point, and teases the anticipated series he has coming up next.

Born and raised in Peru, Varese hit on cinematography as a career through “pure coincidence.” Initially, his dream was to become an architect. After studying architecture in Italy, though, he came back to his home country to find that it had been hit by “economical crisis #348 of the decade.” At this point, of course, “nobody was building anything,” so Varese had to look into other work opportunities.

Subsequently, a friend recommended that he come work for his “adventure travel company.” This led him to a job at National Geographic, as “sort of a local producer-fixer-camera assistant,” and then to CNN, where he served as a news correspondent for 14 years.

Each of the realms he ended up working in, including architecture, documentaries and news, came with their own unique set of skills, which informed the DP Varese would become. “My architecture skills opened a world into understanding art and framing. My documentary skills taught me [how to] be a fly on the wall,” he explains. “My news…world taught me, as a cameraman, that things don’t repeat themselves. You shoot from the hip, and you’re ready constantly.”

Another creative space that proved influential to Varese’s career, during the ’90s, was that of music videos. “That was a very good training ground, and experimental and beautiful and crazy,” he recalls. “At the same time, we all made the mistakes there, so you don’t have to make them in front of Harrison Ford.”

One of Varese’s most memorable moments from this stage in his career was the first time he got to work with the late icon known as Prince. “On the personal side, it was very funny because…my knowledge of music is very limited, because I lived in Latin America,” he says. “I’m a musical person and I love music, but I just don’t remember who plays [what].”

When the DP was first hired to shoot a music video for Prince he says he was told, “You can’t look at him in the eyes, and you can’t touch him,” instructions he quickly forgot about, because unlike most people at the time, he wasn’t a diehard Prince fan. In fact, he didn’t really know who the artist was. “So, there I go to the makeup room and I completely forgot what they told me. I went and literally hugged him,” he shares, with a smile. “It was silent in the trailer, and then from that moment on, we did 10 music videos together.”

One of the DP’s first major opportunities in television came when he shot two Season 1 episodes of HBO’s True Blood, including the pilot. Up next for Varese in this arena is Dopesick, Hulu’s anticipated miniseries on the opioid epidemic, created by Danny Strong, which stars Michael Keaton, Peter Sarsgaard, Kaitlyn Dever, Will Poulter, Rosario Dawson, Michael Stuhlbarg and more.

When he spoke with Deadline about that series’ Virginia shoot, he said he was stunned by what he discovered, as far as the epidemic’s impact on the lives of the crew, alone. “In the crew of 120 or 130, if you ask, every single one of them has…had an issue. Somebody died, a cousin died, they almost died. They have stories,” he shares. “If you ask around, everyone has a problem with that, and what to me is fascinating is that it hasn’t been approached yet. It’s a story that has to be told.”

What Varese loves most about the work he does as a DP is that he’s able to help bring stories like Them and Dopesick to life. In this way, he’s been able to hold up a mirror to the world and its issues, including systemic racism and addiction, also capturing moments in time that people will be able to look back at. “I truly believe that cinematographers or [films], or nowadays streaming, we’re the memories of the 20th century and the 21st century,” he says. “We will know about the 20th century and the 21st century because of films and whatever audiovisual format, and that, to me, is fascinating.”

For more from our conversation with Varese, click on the video above.