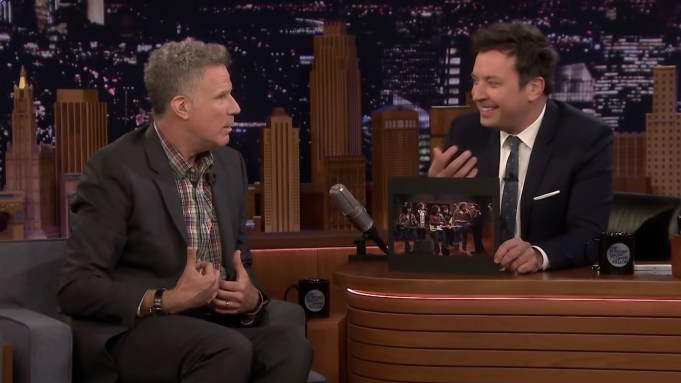 Christopher Walken apparently is a bit haunted by the Cowbell. Will Farrell is hosting Saturday Night Live this week, and in anticipation stopped by to chat with his old castmate Jimmy Fallon on The Tonight Show last night, with the conversation eventually winding its way to their classic sketch “More Cowbell.”

The 2000 sketch re-enacts rock band Blue Oyster Cult recording their hit “(Don’t Fear) the Reaper,” with repeated encouragements by a record producer (Walken) to put in ever More Cowbell. Both Fallen and Farrell, who were in the sketch, say it’s the sketch most brought up by fans.

After a brief reminiscence about the episode, Farrell recounts a years later encounter with Walken, who wasn’t as happy with his Cowbell notoriety.

Slipping into a pretty good Walken impersonation, Farrell said, “Years later, I go to see Christopher Walken in a play, I say hello to him backstage and he’s like, ‘You know, you’ve ruined my life. People, during the curtain call, bring cowbells and ring them. The other day I went for an Italian food lunch, and the waiter asked if I wanted more cowbell with my pasta bolognese.’

“I think he was really mad at me,” Ferrell added.

Watch Farrell tell the Walken story above (the Cowbell talk comes at about the 2:06 mark). Below, watch More Cowbell.