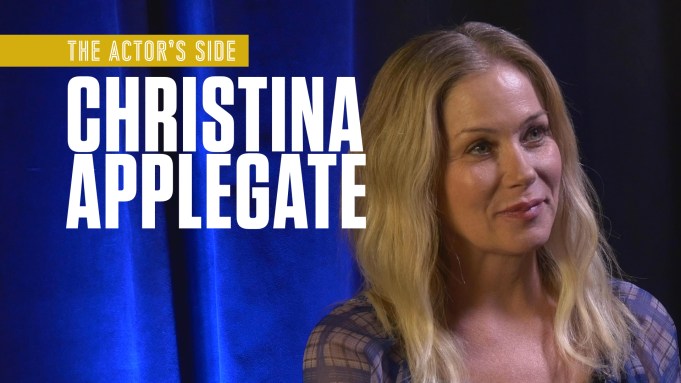 Christina Applegate was born in Hollywood and started a sterling career in front of the camera almost immediately upon coming out of the womb.  As she told me when she visited our Deadline studios to appear on this week’s episode of my video series The Actor’s Side, she made her TV debut in her mother’s arms on Days of Our Lives when she was 3 months old.

Now, more than four decades later, that show is still on the air, but more importantly Applegate has gone on to much greater triumphs in film, TV and on Broadway (she was a Tony nominee for Sweet Charity.) We talk about all of it including the two things she is most recognized for by fans: playing Kelly Bundy for 11 seasons on Married … With Children, and her role as Veronica Corningstone in the two Anchorman movies.

In our conversation we talk about what made Anchorman work, but why she doubts there could ever be a third installment. We also discuss her vast TV career including an Emmy win as Rachel’s sister in Friends; two nominations for Samantha Who?, a show that died too early; and her return to TV in Netflix’s Dead to Me, her first series in six years and one that debuts on the streaming service Friday. She also tells me that she has learned if you want to do a show on Netflix, you better know how to say the F-word, as opposed to what she was used to in network TV for so many years.

Applegate is particularly proud of the heavy female emphasis on Dead to Me both in front of the camera (Linda Cardellini is her co-star) and behind. Applegate plays Jen, recently widowed and determined to get to the answers behind her husband’s hit-and-run death, and the secret that lies beneath the surface of a new friendship she strikes up with Cardellini’s Judy when they meet in a grief support group. Applegate tells me the TV return was not planned, or even desired, but this opportunity to do this very dark comedy was irresistible.

To watch my interview with Applegate, check out the video above. For past The Actor’s Side episodes, click here.