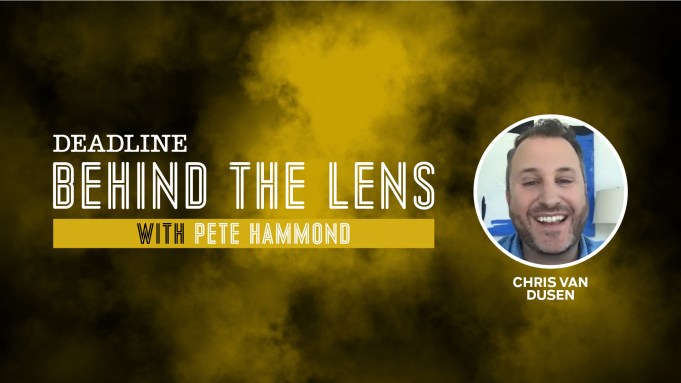 Chris Van Dusen has spent most of his television career lost in Shondaland. Well, not exactly lost, since his credits including writing and producing on such massive Shonda Rhimes hits as Grey’s Anatomy and Scandal among other things. But now he has been found by the Television Academy, which has showered 12 Emmy nominations on Shondaland’s Bridgerton, the first big series for Netflix under its new deal, and that includes Outstanding Drama Series for Van Dusen who is the creator, showrunner and executive producer.

The show not only was a much talked-about, breakout smash almost immediately upon hitting the streamer, but also it clearly made an impact in the industry with all those nominations. It also made an instant star out of Regé-Jean Page, and he is one of the key topics of our conversation as Van Dusen joins me for this week’s episode of my Deadline video series Behind the Lens.

Page managed to land the series’ only acting nomination, perhaps because voters also knew this would be their only chance as Page’s Simon was always planned to be in and out, as it were, in just the first season. Van Dusen talks about how they are filling that gap in Season 2 (currently shooting), and all the endless possibilities to carry on what fans clearly loved about the show which comes from a series of books written by Julia Quinn.

Bringing the romance novel to the screen on a weekly basis isn’t easy, but thanks to looser standards on a streamer than on a broadcast network, Van Dusen was able to go to new places for Shondaland, which clearly has the magic touch in knowing what viewers will flock to see. He is also proud of the diversity he was able to bring to the show in its casting and behind the scenes, as well as taking a period story and really making it pop for a contemporary audience.

What’s it like working with Shonda Rhimes? You will find out, as well as how they shot all those steamy sex scenes. Just click on the video above to go “behind the lens” of Bridgerton with Chris Van Dusen.

Check out a new Behind the Lens every Friday during Emmy season.