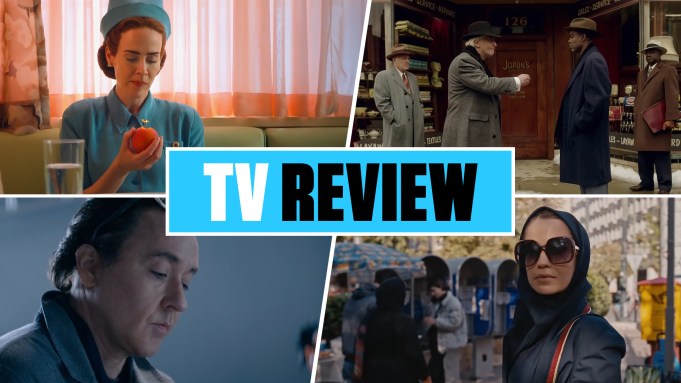 The first week of the 2020-21 television season is almost over, with some of the best saved for last. But before we go there and unveil the show you have to watch this week, let’s jump back a bit.

As I note in this week’s video review, last week saw the launch of One Flew Over the Cuckoo’s Nest prequel Ratched on Netflix. Already a big hit on the streamer since its September 18 debut, the series created by Evan Romansky and executive produced and developed by Ryan Murphy stars frequent Murphy muse Sarah Paulson in the role of the hardened mental institution nurse that won Louise Fletcher an Oscar in the mid-1970s.

Now Back for its fourth season more than three years after its third season concluded, FX’s September 27-premiering Fargo is also a throwback to an America of decades ago that simultaneously reflects the country of today. Set in 1950s Kansas City, this run of the Noah Hawley-created anthology series based on the Coen Brothers’ 1996 Oscar winner of the same name features Chris Rock and Jason Schwartzman as crime kingpins working together and against each other across racial, civic and offspring lines.

Originally set to debut in April, Fargo’s fourth season was delayed after the coronavirus pandemic shut down production. With the vast majority of the episodes shot, Hawley and team picked up where they left in August and finished the 11-episode season September 8.

Centering on a biotech genius (John Cusack in his first regular TV role), Utopia feels very close to reality with a deadly virus flowing through its narrative. Inspired by a British series of the same name from 2013, this Utopia focuses on a gang of comic book fans hoping to prevent the end of humanity through clues hidden in the pages of the titular comic – that’s the concise version of the sprawling conspiracy thriller.

Iran has long been a focus of America’s foreign policy and the Niv Sultan-starring Tehran takes viewers deep inside the Islamic Republic with a Mossad agent on an undercover mission that goes off the rails and off book.

Having aired earlier this year in Israel and now with its opening episodes on Apple TV+, Tehran finds Sultan co-starring with Iron Man and Homeland actor Shaun Toub and Aladdin’s Navid Negahban. The series was co-created and written by Moshe Zonder, who was the lead writer on that other explosive Mossad undercover series, Netflix’s Fauda. Dana Eden and Maor Kohn created Tehran alongside Zonder, who recently inked a first-look deal with Apple. Omri Shenhar is also a writer. Daniel Syrkin directs Tehran, which is executive produced by Eden, Shula Spiegel, Alon Aranya, Julien Leroux, Peter Emerson and Eldad Koblenz.

So, click on my video review above to find out which of these shows you have to have this week.

Additionally, don’t forget Showtime’s The Comey Rule kicks off its two-night run Sunday. Take a look at my review here of the political drama starring Jeff Daniels as the former FBI director and Brendan Gleeson as Donald Trump. You won’t want to miss it.