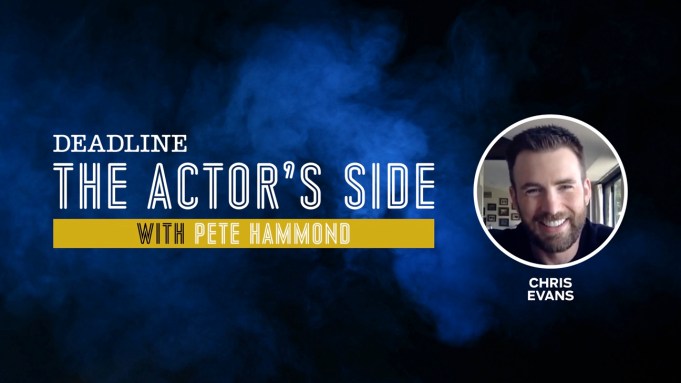 Chris Evans joins me on today’s episode of my Deadline video series The Actor’s Side and we cover it all, from one of his first jobs in the business (you won’t find it on his IMDb page) to his current role as Boston DA Andy Barber, whose teenage son is accused of murdering another student in Apple’s eight part limited series Defending Jacob.

After huge success on the big screen, especially in the superhero realm as Captain America in numerous Marvel films — including the biggest movie of all time which of course is Avengers: Endgame — surprisingly the actor’s next move was for the small screen, but you can easily see why he was drawn to the project on which he also serves as an executive producer. Defending Jacob tells a riveting story and provides Evans with the kind of complex and evolving character not easily found in movies these days.

For me, it played simply like an eight-hour movie with great cinematic style. Evans says originally it was planned for theatrical, but it seemed the story deserved more time and nuance that the limited series form provides. He says there is now more risk-taking allowed for actors on TV, no longer a line in the sand for movie stars wanting to stretch in this format, but the bottom line is he wanted to work with these people as he put it, meaning writer-producer Mark Bomback and director Morten Tyldum (both from the big screen as well), not to mention co-stars Michelle Dockery, Jaeden Martell, J.K. Simmons and Cherry Jones among others. It doesn’t get better than that, and Evans talks in this interview about not hesitating if another TV opportunity came along like this one. (In another recent interview with me, he even hinted he wouldn’t mind returning to the role of Andy Barber if the right circumstances came around.)

I mentioned a smaller indie film of his I admired called Puncture in which he played a drug=addicted lawyer, and he says the two roles had something in common in addition to the law profession. We also talk about playing a superhero and why those films don’t always get the critical and Oscar love they deserve. The aforementioned Avengers finale was also his end game for Cap, and it is now hard to believe but he admits he almost passed on it originally. Since then he also had a huge hit in Knives Out and has high praise for its director Rian Johnson.

We start however with that early job he had, one that doesn’t get much play in his official bios, but a job he said he was thrilled to have. To find out what that was, and to hear the Actor’s Side from Chris Evans, click on the video above.