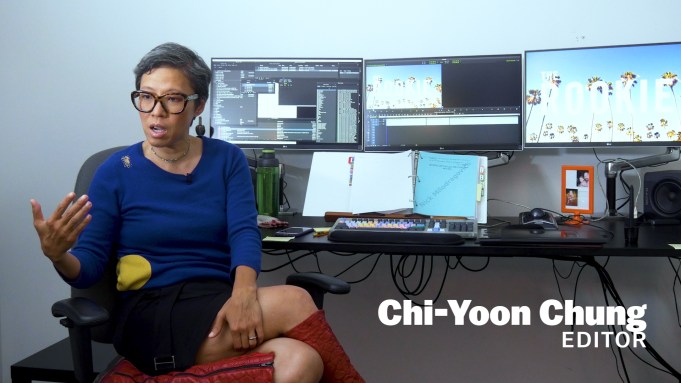 Emmy-winning film editor Chi-Yoon Chung has learned her craft from the likes of documentary filmmaker Nancy Baker and Oscar-nominated Silence of the Lambs and Reds editor Craig McKay. She recently put those skills to use cutting the pilot for ABC’s Nathan Fillion cop drama series The Rookie, which she discussed on Deadline’s latest edition of its Production Value video series.

“On a pilot, you get anywhere from 4-6 hours of dailies, so that’s a lot of material,” said Chung, who has worked on Ryan Murphy’s Feud and American Crime Story anthology series, winning her Emmy for The People Vs. OJ Simpson in 2016 and nominated again last year for The Assassination of Gianni Versace. “So, what I do is I always look at everything and then just start cutting things as fast as possible — no belaboring stuff, just make a decision and then you move on because there’s no time.”

For The Rookie, which was renewed for a second season last month, that means sorting through a mix of drama and then of course action, which Chung sparks to.

“The action stuff is fun because you’re out in L.A., and that’s like fun,” she said. “You’re like, ‘Oh, I know where that is in Toluca Lake, or, ‘Oh, I know where that liquor store is in Hollywood.’ The best thing about that [for The Rookie] was when they shut down Hollywood Boulevard. I hadn’t seen that on a show for a while, so that was super exciting for me … I was like, ‘Oh my god, they shut down Hollywood Boulevard, the traffic must have been a nightmare.’ So that was fun to cut that – you get to see the scope of L.A.”

Chung also talks about an editor’s job tailoring a TV director’s work to fit the broader scope of a series, how the use of actual police bodycams in The Rookie provided some unexpected twists, and how the less serious moments on screen work out well in the end when the actors jell.

“It was fun to cut the show because you have these kinda serious life moments, and then you have them kinda busting each other’s chops,” she said of the series, in which Fillion plays John Nolan, the oldest rookie in the LAPD. “That actually is not that hard to cut. All the actors are really good, they like each other, so that stuff is … I don’t wanna say it cuts itself, but it kinda cuts itself.”