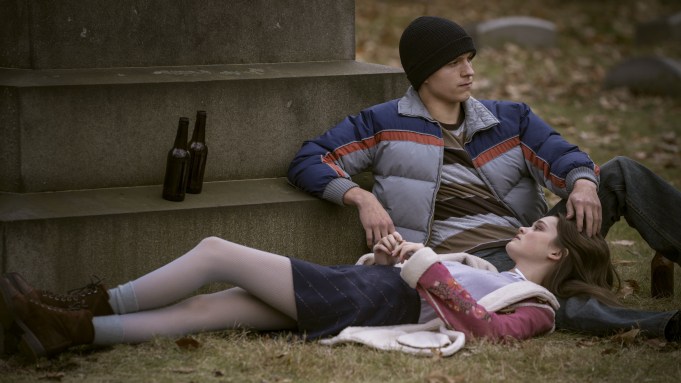 Apple TV+ has released the official trailer for Cherry, the drama that teams Marvel alums Tom Holland and Joe and Anthony Russo in the true life tale of a Iraq War hero who battles PTSD and spirals into addiction and robbing banks upon his return to civilian life. The pic will hit theaters and the streamer on February 26 .

Based on Nico Walker’s novel based on his life story and with a screenplay by Angela Russo-Otstot and Jessica Goldberg, Holland’s Cherry drifts from dropping out of college to serving as an Army medic in Iraq, through it all anchored by his true love Emily (Ciara Bravo). But his undiagnosed PTSD spurs bad decisions, shattering his relationship as he falls. Jack Reynor, Michael Rispoli, Jeff Wahlberg, Forrest Goodluck and Michael Gandolfini also star.

The pic is a darkly humorous, unflinching coming-of-age story, one which Deadline’s Pete Hammond has said “is reminiscent of ambitious kinds of epic studio dramas common in the more adventurous cinema of the 70s.” It also marks the Russos’ first directing gig since Avengers: Endgame, the highest-grossing movie of all time. This one they financed themselves — like Walker, the brothers are from Cleveland where this movie is set — via their AGBO production outfit.

Apple is making it a big awards-season play after it acquired worldwide rights to the pic in September in a deal in the $40 million range.