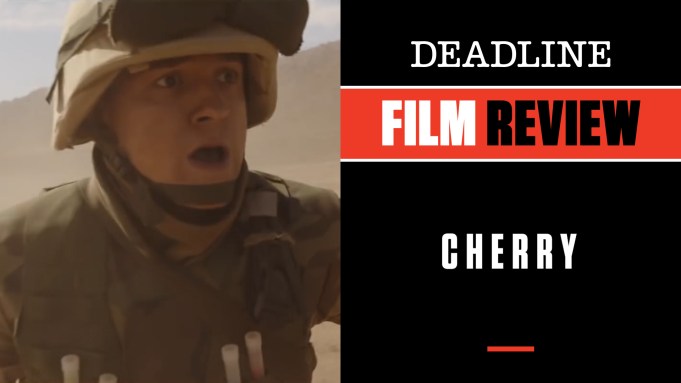 What do you do after you direct the biggest-grossing film of all time?

If you are Joe and Anthony Russo, you get personal and you go indie. That is exactly what the filmmaking brothers decided to do following their huge success in the MCU and the final two Avengers movies in particular. Bringing one of that franchise’s biggest, and youngest, stars along for the ride, they have cast Tom Holland, best known for playing Spider-Manin the latest iterations of that comic book hero, but in a very different and demanding role in the lead role in Cherry.

Perhaps inspired by epic dramas and challenging films of the 1970s, this has personal connections to the pair since it was filmed largely in their hometown of Cleveland and Ohio suburbs and zeroes in — at least in part — on the opioid crisis so affecting that area. Based on the novel by Niko Walker, Cherry is structured like a book, divided into six distinct chapters of a troubled young man’s life. Each chapter adopts a different visual style and technique, and each delves into a completely separate genre spanning two decades. There is enough movie here for several films, but the triumph, however rough the going might be in parts, is that the Russos manage to make it a cohesive whole in what could have become unwieldy.

‘Cherry’: Read The Screenplay For The Indie Drama That Is Close To Home For The Russo Brothers

Still, you might be excused if you think the directors couldn’t decide which genre to dive into next after working in the MCU so they found a vehicle where they could do it all. It is at once a love story, war film, drug-addiction saga, crime drama and prison tale — just about every staple but westerns — but ultimately it all rests on the shoulders of Holland, whose journey throughout is epic in and of itself. Traversing a gentle relationship tale between Holland’s character and college girlfriend Emily (Ciara Bravo), it soon gets very serious when he becomes a dropout and we follow the young man into fierce combat in Afghanistan with intense battle sequences. He returns a war hero but also suffering from undetected PTSD and an oncoming addiction to drugs and heroin likely caused by that. He returns to his hometown, hanging with a less-than-desirable wild bunch, engaging in a series of bank robberies to stay above water financially. His continuing downfall is a sad one as he proceeds to get in over his head, taking Emily down the addiction path with him, with their relationship sinking further as he gets in deeper.

Tom Holland On Working Again With The Russos In ‘Cherry’, Being An Avenger & Shooting Spidey 3 During A Pandemic – The Actor’s Side

The Russos remain skilled filmmakers with an eye to the story they tell, and they certainly have proved on a large scale that they can traverse a lot of moving elements but never lose sight of what they are they to achieve or biting off more than they can chew. They are fully in charge here of Walker’s tale, one partly based on his own life experiences but largely invented. The screenplay comes from the Russo brothers’ sister, Angela Russo-Otstot, and Jessica Goldberg, who were presented with the challenge of taking a lot of material that could get a more in-depth treatment perhaps as a TV limited series and making it work as a 2 1/2-hour feature film. The tonal shifts are daunting indeed, but its real power lies in the emphasis of the tragic role of drug addiction — the harrowing descent into heroin — and how it consumes lives. These sequences are authentic to the core and frightening in many ways, particularly one where He desperately shoots up on the side of the street as cops are about to move in. The filmmakers do not go easy on the audience in scenes like this one, but the point is very clear: The price very high for a young man who lost his way and might not find a road to redemption. Rewards are here for filmgoers adventurous enough to go on the ride.

Holland has the role of his young career and proves capable of acting ability on the highest levels. Aging from 17 to 35 cannot be easy on screen, but Holland is credible all the way. Bravo is every bit his equal, and they have a good deal of chemistry that goes far. She is a real find. The supporting cast has its moments as well, including nice turns from Jack Reynor, Michael Rispoli, Forrest Goodluck and Michael Gandolfini among a large list. Veteran cinematographer Newton Thomas Sigel does exceptional work, giving distinct looks to ever-changing environments.

Producers are Mike LaRocca, Jonathan Gray, Matthew Rhodes, Jake Aust, Chris Castaldi and the Russos. Check out my video review with scenes from the film by clicking on photo link above. The film will begin streaming March 12 on Apple TV+ after an initial theatrical run that begins Friday. Cherry is a film made to be seen on a big screen, which is where it would play to its full potential, but the times they are a-changin’.