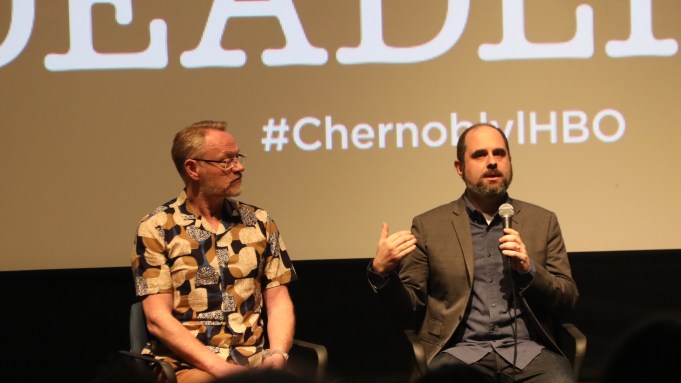 In writing and creating HBO’s limited series Chernobyl, which has 19 Emmy nominations, Craig Mazin had to grasp two sides of the same coin: both the science, and the human impact of the 1986 nuclear reactor explosion.

“It was a bit like going back to school and doing a very large term paper,” Mazin said at Deadline’s screening series at the Landmark Theater on Sunday. “I went down to USC and talked to a nuclear physicist and basically, I did a version of, ‘Tell me how a nuclear reactor works.’ And he did. And it’s actually not that complicated, that’s the thing.”

The human side of the story was, of course devastating and extremely complex. “The most valuable parts of the research were the first-person accounts,” Mazin said, “and anywhere I could find one of those, I would just grab on to it and hold it and really care about it. That’s where the humanity comes through. Because ultimately, you do need to be two things at once. You do have to be a term paper writer, and then you also have to be somebody who understands the purpose of making a television show, which is to portray human beings feeling human things in such a way that we can relate, and that matters to us. It’s a very left-brain/ right-brain exercise”

Also at the event was Jared Harris, who played the lead role of real-life scientist Valery Legasov—charged with investigating the disaster on site in its immediate aftermath. Legasov’s friendship with Stellan Skarsgard’s character Boris Scherbina is at the heart of Chernobyl. Harris said it was “very easy” to work with Skarsgard. “He’s delightful,” Harris said. “He’s got a wicked sense of humor. He’s incredibly easy going. You want him to like you, he’s got one of those personalities.”

Despite shooting the series in Lithuania, Mazin said he felt it was important to visit Pripyat—the site of Chernobyl, which was then in the Soviet Union and is now part of the Ukraine. However, some parts of his guided tour sounded somewhat alarming. “At one point we were at that iconic ferris wheel,” Mazin said, “and one of our guides tapped me on the shoulder and said, ‘Not on the manhole’…I got worried for two seconds, and I was like, ‘Oh I’m sure it will be fine.’ But we were in the pump room of Reactor 3 and that was as close as we could get. In there the dosimeter was beeping. The guide was like, ‘We have about a minute in here.’ And I was like, ‘Or, half a minute? It’s cool. We don’t need the whole minute.’”