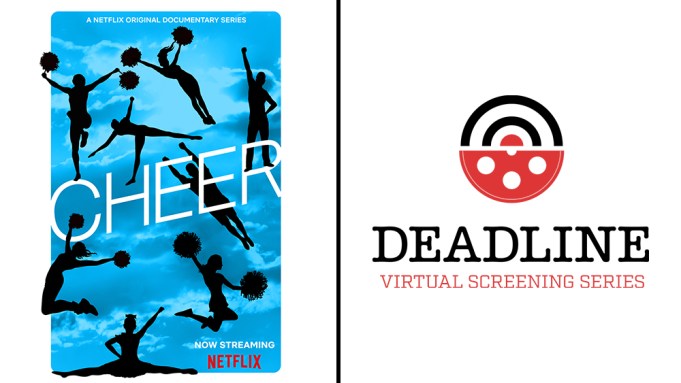 Netflix’s Cheer hit the streaming giant in Janurary and it immediately shot up into the air like the perfect toe touch to become a hit. Now, the docuseries directed by Greg Whiteley (Last Chance U) has been nominated for six Emmys including Outstanding Unstructured Reality Program. Director Whiteley, cinematographers Erynn Patrick and Melissa Langer were joined by Navarro Cheer head coach Monica Aldama and fan-favorite cheerleader Jerry Harris to give the Deadline Virtual Screening audience a “mat talk” about how the popularity of the docuseries following the Navarro Cheer team has impacted their lives.

“It’s been incredible, we definitely had no idea what to expect,” Aldama said of the response to the series. “I was just hoping that the cheer community would watch it. I’ve never done anything like this — it is out of my element.”

Aldama said she was surprised by all of the feedback they have received — which happened almost immediately after the series debuted. “Literally, the day it came out, my inbox just started getting flooded with people who have watched it,” she said. “We’ve been on a ride that’s pretty high.”

Harris, who is endlessly joyful and encouraging, echoed Aldama’s sentiment saying that it was sweet to get all the love that he got for just being himself. “The fact that I just got to go through all this with my family, teammates and my lovely coaches — it means the world to me,” he smiled.

The world of competitive cheerleading in Texas is next level and Whiteley’s docuseries reflect with Aldama, Harris and the rest of Navarro Cheer from Navarro College in Corsicana Tex. We see them go through a physically demanding and emotional journey the national championship that will give you no choice but to be inspired. And no one is as inspired as Whiteley.

“Every time I see Monica and Jerry, my heart soars,” admitted the director. “I just love them so much… it’s one of the great honors of my professional career to even just hang out with them and get to know them, let alone being able to document their lives and being able to share it with the world.”

He added later in the Q&A, “We just turned the cameras on and pointed them towards Monica and Jerry and the rest of the team and that was pretty much where my job stopped. Their stories were so incredible and the access they gave us was so great — it was inevitable that this would happen.”

Watch a clip from the Q&A from the screening above.