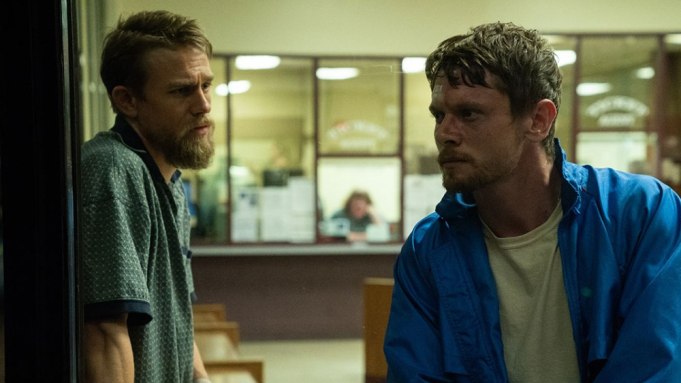 EXCLUSIVE: “When a reluctant bare-knuckle boxer and his older brother rack up a hefty debt, they are forced to chaperone an unexpected travel companion cross-country for one last fight in search of their fortune.”

That is the simple one-liner description for Jungleland, which has its world premiere Thursday night at the Toronto Film Festival. It’s pretty accurate because that is the plot, but what really works about this compelling character study from director Max Winkler, who co-wrote the script with Theodore B. Bressman and David Branson Smith, is the journey of these three people in a movie that for me harkens back to some of the great actor-driven movies of the 1970s. It has smart dialogue, a terrific trio of stars and a familial sensibility that also makes you care deeply what happens to these three on their journey. Oh and their dog too. I see lots of movies, obviously, and I have seen a ton at this year’s TIFF, but this one — even viewed in rough-cut form in a screener, which is how I saw it — has stuck with me. Watch an exclusive clip above.

The male melodrama movies of the ’70s and ’60s are also what led Winkler (yes, son of Henry, whose previous features include Flower and Ceremony) to tell this tale. He mentions inspirations including Five Easy Pieces, Hud, Scarecrow, anything with Brando, and, for this one particularly, the 1973 Jack Nicholson film The Last Detail,. But in this case there is a female component in the trio. Ultimately, though, it is a moving tale of two brothers, the older Stanley played by Charlie Hunnam in his best screen outing yet as a guy in over his head, basically exploiting his scrappy boxer of a younger sibling Lion, beautifully played by Jack O’Connell as he tries to get out from under.

“Those kinds of movies always kind of emotionally resonated with me,”Winkler tells me. “I love seeing these guys who were so tough on the outside really kind of emote and with the weight of the world on their shoulders, that seem like they’ve got everything covered, then start to break down. And I wrote this movie probably 10 years ago, honestly.” He noted that the long gestation period was due to getting the casting, which also includes British actress Jessica Barden (The End of the F***ing World) as Sky, the girl who becomes the third component of this road trip.

“There were so many different producers and so many different iterations of it, and people really wanted me to make it a very specific way and cast very specific people, and I knew that for this movie to have any chance to work it was 100 percent cast-dependent, it was the casting that was everything, and I really kind of was patient,” Winkler said “I made another movie in between, and we ended up getting this cast of actors that I found to be truly special.”

Ridley Scott’s Scott Free is the key production company that helped bring it to fruition and Scott has an executive producer credit on it. Producers are Brad Feinstein, Jules Daly, Kevin J. Walsh, Ryan Stowell.

Another inspiration was a certain classic novel that he had by his side while making it. “I had a copy of Of Mice and Men on me for the whole shoot, and that book was, as those movies were, extremely influential on the writing and shooting process because I wanted to kind of have that sort of old John Steinbeck-y feeling of these guys who just go from town to town looking for work however they can get it, kind of getting crushed at it — you know, searching for the American dream with some great difficulty even though they go about it sometimes in not the right way.” He knows full well that this kind of film might have been studio fare in the ’60s and ’70s but is difficult to get made these days. He points to Manchester by the Sea, on which Walsh was a producer and Howell a co-producer, as something that gave him hope for this one.

“Because there’s so much fear around making a movie without any bells and whistles, it’s just about the human condition and loss and hope, and that movie Manchester by the Sea was a massive hit,” he said. “I mean, that is if you look at how much money it made and it’s wild, upwards of $100 million, I think. To go back on that when anyone would say, ‘It’s too hard; we don’t want to make movies about people without capes; we don’t want to make movies that aren’t based on existing material.” … Kevin was just really bullish that we couldn’t use that as an excuse to take no for an answer,” Winkler added in explaining the perseverance it takes to get an original drama like this into production.

As for its Toronto world premiere on Thursday night at the massive Princess of Wales Theatre, Winkler said the timing just worked out. “Actually a little over a year ago is when we started shooting, I believe, and we finished the movie just in time for Toronto,” he said. “I had a great experience with them on my first movie, which we sold out of there, and I love that festival and I love that film community and I love the people that go and see the movies, and I love the programmers. And it just felt right, and I think we were just really excited to get this out into the world and especially the timing of the fall. It just felt like the right time to show off these performances, and it wasn’t a strategic situation it was kind of our first one up and we just said let’s try Toronto and we were really excited. I have to believe that we were one of the last people that they accepted because we just finished.”

Check out the exclusive clip from Jungleland by clicking the link above.