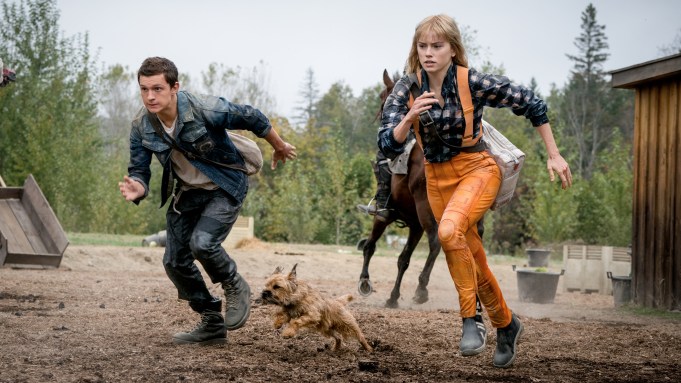 Lionsgate dropped a trailer for their $100M YA sci-fi feature Chaos Walking saying that the release date is still Jan. 22, 2021. We’ll see about that with theaters closing down now, unless, Lionsgate decides to go day and date theatrical PVOD with the major circuits on the movie. If Warners can move the needle with Wonder Woman 1984 and have it play in theaters and on HBO Max at the same time, why can’t other distributors reap those benefits in the big circuits? We’ll see.

Chaos Walking is the $100M pic from director Doug Liman that is seen as a big bet for Lionsgate to regain its footing in the YA space it once owned with The Hunger Games. It was determined in mid-2018 that Chaos Walking needed an estimated $15M of reshoots, but Daisy Ridley’s schedule on the Star Wars movies and Tom Holland’s Spider-Man and Avengers pushed those reshoots. In May 2019 it was reported that Don’t Breathe director Fede Alvarez was helping out with those reshoots in Atlanta while Liman remained on board. The feature was originally dated to open on March 1, 2019.

The spaceship of Ridley’s Viola Eade crash lands on a planet, in a world where people can read each others thoughts. However, no one can read Ridley’s thoughts. She meets Holland’s Todd Hewitt, and hears his thoughts: “I’ve near met a girl before.”

“Where are all the women?” Ridley asks Mads Mikkelsen’s Mayor Prentiss. He responds, “They’re dead.” And there’s the set-up. Essentially Viola is on the run, and her powers, together with Todd’s, are a powerful combo. Oh, and there are “thousands” of women coming to this forest planet which is a threat to the testosterone dwellers according to Viola. That’s a big threat to those dudes.