Continue to Deadline SKIP AD
You will be redirected back to your article in seconds
Skip to main content
March 3, 2021 6:43pm 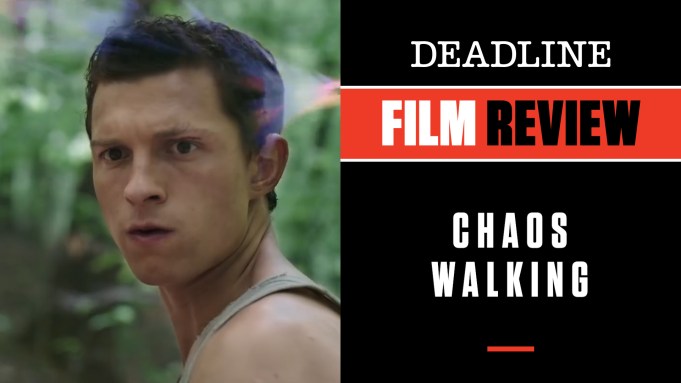 Lionsgate certainly is no stranger to wildly successful franchises developed from YA novels like Twilight, the Divergent series and The Hunger Games. So it is no surprise it would want to keep the cash cow going by launching yet another attempt at an ongoing dystopian movie series. Chaos Walking probably won’t do the trick, but nice try anyway.

Based on British author Patrick Hess’ first book of a trilogy The Knife of Never Letting Go, this sci-fi/Western hybrid with a script by Hess and Christopher Ford, and directed by Doug Liman, focuses a couple of hundred years in the future on a town on a distant planet called New World. It actually looks like Earth to me, but in fact is a place travelers come to in elaborate spaceships in search of what they think will be a better life after a horrible apocalyptic occurrence has happened on Earth.

This dystopian destination is no paradise as it turns out, especially for the female species who seem to have completely disappeared. The self-styled Mayor, David Prentiss (Mads Mikkelsen), says it is the feared locals, alien creatures known as Spackle, that brutally slaughtered them upon arrival. You only have to know Mikkelsen’s vast history of playing villains in movies to know there is probably a different truth about the disappearing female population. But this is his explanation, and it is all Todd Hewitt (Tom Holland) believes. He is an orphan, brought up by Ben (Demián Bichir) and Cillian (Kurt Sutter), and has never seen a woman until one named Viola (Daisy Ridley) crash-lands on New World. She is on a scouting pod from one of the hovering spacecraft to check the place out.

Oh, did I mention a key thing? All the men suffer from a weird malady caused by the environment called Noise. Their very thoughts can visibly and audibly be heard and they have a ghostly swirling orb floating over them as they try to compress those thoughts. Todd just keeps repeating his name over and over to himself to cover up any stray thoughts. The only man seemingly unaffected is Prentiss, whose catchphrase does the trick: “I am the circle and the circle is me.” Women apparently were immune from this, so you have a potential battle of the sexes here, women being able to read helpless male thoughts but not vice versa. That is a power play these men can’t abide.

Will the truth come out about what really happened to the ladies in New World? You bet, and it ain’t pretty. Todd, warming to Viola, strikes up a relationship eventually helping her escape Prentiss and the clutches of his gang — including son Davy Jr. (Nick Jonas) — as they head to another town, one with actually some women including Mayor Hildy (Cynthia Erivo) who are themselves out to survive. Among others we meet is firebrand preacher played by David Oyelowo who is all bad news. As Todd learns the real truth, and Viola shows she is smarter than the average bear, the twosome try to save the future until the next franchise installment. And what of the Spackle? They are basically irrelevant, but if you watch this thing you will be able to find out for yourself.

Liman, whose last foray into sci-fi with the Tom Cruise-Emily Blunt time-loop flick Edge of Tomorrow was far superior to this contrivance, still is too smart a director not to deliver some requisite exciting action and nice character development for Holland and Ridley, even if this doesn’t become the ultimate Spider-Man vs. Star Wars showdown the casting might promise to fans of those film series. I particularly liked the tender scene in which she reads his dead mother’s diary to the illiterate Todd. There’s also an amusing scene in which, oblivious to the anatomic differences between women and men, he strips down in front of her without a thought of decorum. His affection for his dog Manchee and horse Whiskey are sweet too, but animal lovers beware — just sayin’. Mikkelsen is properly menacing, but beyond him and the two main stars the aces cast is largely in and out without a lot to do.

Production values are excellent, but Planet New World ain’t all that different from Planet Earth. For those who want to know where this all leads (there is an obvious sequel setup), I would recommend reading the other two books because it may be a very long time before anyone attempts to finish off this trilogy in the movies.

Check out my video review above with scenes from the movie. Do you plan to see Chaos Walking? Let us know what you think.