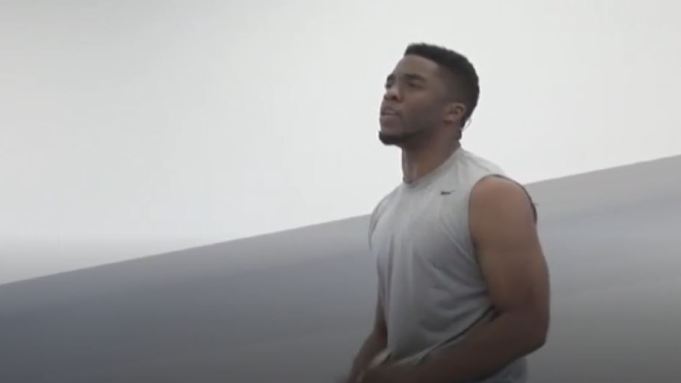 After Tony-winning director Kenny Leon posted a snippet of footage of Chadwick Boseman’s duet with Christopher Jackson (who played George Washington in the original cast of Hamilton), there has been revived interest in Holler If Ya Hear Me, the musical inspired by the words and music of the late artist Tupac Shakur. There is also interest in finding a way to do something with the entire filmed musical as it was performed by Boseman, who exited just before it came to Broadway to launch his star in Hollywood with the James Brown film Get On Up.

Above, see a solo number performed by Boseman.

Eric Gold, the former co-manager of Jim Carrey and ex-manager of Ellen DeGeneres and exec producer of In Living Color, bankrolled the Broadway hip hop musical which maybe was ahead of its time — Lin-Manuel Miranda’s Hamilton came not long after and made Broadway history. There is suddenly renewed interest in seeing what can be done for fans to see the previously unseen filmed numbers Boseman performed in the workshop. Boseman’s performance as Jackie Robinson will be back on display as 42 is rereleased, and this footage seems perfect for a streamer to capture a moment in Boseman’s career long before he played iconic roles including Jackie Robinson and Black Panther.

Gold said he will do what Leon and other creatives involved in the show want to do. Leon isn’t sure what to do with it. Below is the duet with Jackson that Leon released and started the dialogue on this.

Broadway's Holler If You Hear Me lost Chadwick to Get On Up. So happy so see this footage. https://t.co/iEejbEy2Rv

“Chad left just like my friend August Wilson did,” Leon said. “I got to direct his plays on Broadway, but they both left us work to do, they left inspiring us to do better work. Through his work he was encouraging us to be better people, through his actions he was advocating for people to vote, to take care of kids with cancer, he was advocating to spread Tupac’s words. Which were, you are forgetting about the young people in the ‘hood. You’re forgetting about the gap between the haves and the have nots. In many ways, to me, he had a bit of Dr. King, Malcolm X, Jackie Robinson in him. In many ways, he was our superhero. We’re going to miss him, but we’ve got to do the work and that is what he would wish.”

How did Boseman get on Leon’s radar for the lead of a Broadway musical? He was introduced to him by the musical’s associate director Kamilah Forbes.

“At first, I viewed him as a writer, and as a poet, and an intellect and then Kamilah, who’s running the Apollo now, she introduced me to Chadwick and said he might be good for our workshop,” Leon said. “And, wow. We were not talking about Tupac the person, we were talking about Tupac the artist. He took Tupac’s words and made them plain and made them apply to any community, at any time. When Chris Jackson and he were in the room together, it was like through song they were talking to each other. He was huge because he broke down the language, made it so simplistic. He already had the respect of the Broadway artistic community. They sort of knew him and respected him as a writer and poet. A lot of people didn’t know he could act, and rap, and sing, but it only took us one day in the room and Chris Jackson was like, ‘Oh man, this guy is the real deal.’ ”

Boseman’s Broadway dream was dashed when he got offered his first starring role in a studio movie. He would exit and Saul Williams took over the role.

“I remember him coming to me, this was right before we went to Broadway, and he said, ‘I told you I wanted to come to Broadway, but I just got this offer do this film,” Leon recalled. “What should I do? I want to do this play.’ I said, ‘Chad, you gotta do the film. You have to go out West for a while.’ It sort of tore him up, to see him as an artist who knew he had to do the film work, but was committed to the importance of what Tupac was saying. He wanted to be a part of that. I said, ‘Don’t worry, we’ll get to Broadway one day.’

“Last August, we were talking about him maybe coming to Broadway in another play, and in retrospect, I realize our conversations sort of slowed down, because of what he was going through,” Leon said. “There’s no one quite like him. When I posted the video, I was surprised at how surprised people were that he could do that. He was equally great in everything he touched.

“If you notice in that rehearsal and those videos, the ensemble is sitting around,” he said. “You usually see people if they have to move a prop, but these actors were sitting there, focused on Chadwick. Who demands attention from fellow artists even in rehearsal? He brought himself 100% to every rehearsal. He was in performance mode, every rehearsal.”