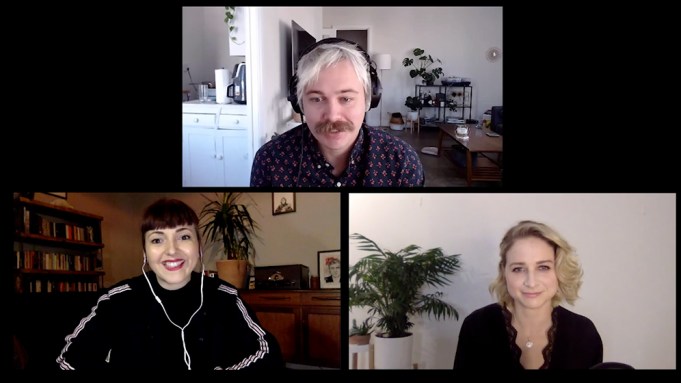 Marking the feature directorial debut of Prano Bailey-Bond, Censor offers up a fascinating and unsettling meditation on film censorship, within the context of ’80s Britain.

Starring Niamh Algar, the film tells the story of Enid, a censor who comes upon a film, which speaks to her sister’s mysterious disappearance. After setting out to find its director, Frederick North, in hopes of understanding the film’s connection to this tragedy from her past, the character finds the lines between fiction and reality starting to blur in horrifying ways.

For Bailey-Bond, who is a self-proclaimed “massive horror fan,” Censor had multiple inspirations. Interrogating the influence of horror films on the public—and on the very people tasked with censoring them—it stemmed from her study of a “really rich and fascinating” period in UK history, when low-budget horror and exploitation films dubbed ‘video nasty’ generated controversy and moral panic.

“The UK had the most conservative reaction to VHS horror, more than any other Western country, and over here, these films were seen to potentially be about to poison society’s minds, and turn everybody into murderers and rapists,” the director explained, while sitting down at Deadline’s virtual Sundance Studio with Algar. “These films were being banned, and what that did was generate loads of interest in the films. So, you’ve got a lot of films on that ban list that may not actually have been known at all by horror fans, if it hadn’t been for the censors.”

First meeting Bailey-Bond at Screen International’s Stars of Tomorrow showcase in 2018, Algar was drawn from the start to her style of filmmaking, and therefore jumped at the chance to play the traumatized Enid—a female character she’d never before seen on screen. Prepping for the film remotely while on another shoot in South Africa, the actress came to understand the world and tone of Censor by watching assorted horror films recommended by her director. “I was traumatized for a good, solid month because…I’m such a wuss, as regards horror,” Algar admits. “Like, I just find it really difficult. I’m so easily scared, so I’d watch everything during the way so I could sleep at night.”

For Bailey-Bond, one of the most exciting aspects of making Censor was that it offered her the chance to create films-within-a-film, the challenge being to emulate a range of horror styles, without venturing into parody, or pulling viewers out of Enid’s experience. “I had to think about who Frederick North was, as a director, and what his directing style is. Because ultimately, they’re his films, not mine,” she says. “So, I’m almost playing a director, directing the films within the film.”

Also starring Adrian Schiller, Censor debuts at Sundance today at 9 PM PST. For more from our conversation with its director and star, click on the video above.