As Packaging Comes To An End Today, Squabbles Over Grandfathered Projects Likely To Continue; Analysis + WGA Q&A
Read the full story
May 17, 2021 12:34pm 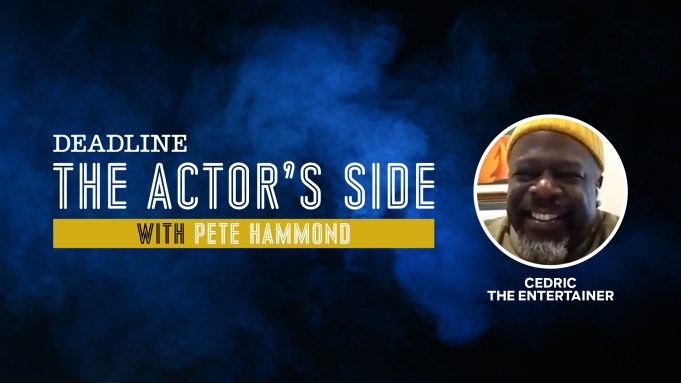 Cedric Antonio Kyles joins me today for this special Monday edition of my Deadline video series, The Actor’s Side, but of course the world knows him better as Cedric the Entertainer. The comedian-actor stars on the hit CBS comedy series The Neighborhood, which anchors the network’s Monday night lineup and airs it third-season finale tonight.

As I tell him, I discovered the show while being home much more often than usual on Monday nights during the pandemic and immediately became a fan. It is no wonder it was an out-of-the-box hit and should play for many seasons to come, much in the tradition of classic multi-camera sitcoms (it was created by Jim Reynolds of The Big Bang Theory). The underlying theme is about gentrification, but the show flips the idea and instead looks at what happens when a Midwestern white family including co-star Max Greenfield moves into a predominantly African American neighborhood in Southern California.

With echoes of a classic Norman Lear-style comedy of the 1970s, it isn’t always smooth sailing and at first and made Cedric’s character Calvin not entirely sympathetic as he had problems with the new neighbors. But as the series has evolved, it shows how universal so many things that happen to families of all races really are. The chemistry between among the actors, who also include veterans Tichina Arnold and Beth Behrs, is palpable and believable, and the show is a refreshing throwback in a world where things change so rapidly, almost like comfort food but with a real edge.

I talk about all of it with Cedric, beginning with the question of how he got that name and why General Mills, no less, delivered a cease and desist when he previously called himself “Cheerio.” We also discuss why a classic kind of broadcast-network show that is as exceptionally well done as The Neighborhood doesn’t get the same critical and industry respect as those on pay cable or streaming but why it should.

Among other areas we explore are his entry into show business with instant success as a stand-up comic; whether a reboot of his iconic The Kings of Comedy might be in store; why his 2005 movie version of the Jackie Gleason-Art Carney sitcom The Honeymooners was not as big a hit as expected, despite a rave from none other than the late Roger Ebert; and how Paul Schrader asked if the actor would use his real name (Cedric Kyles) for the critically acclaimed film First Reformed, in which he had a supporting role opposite Ethan Hawke and Amanda Seyfried.

To watch our conversation and get “the actor’s side” from Cedric the Entertainer, just click on the link above.

Check out new episodes of The Actor’s Side every Wednesday.