Continue to Deadline SKIP AD
You will be redirected back to your article in seconds
Skip to main content
December 1, 2019 5:38pm
18Comments 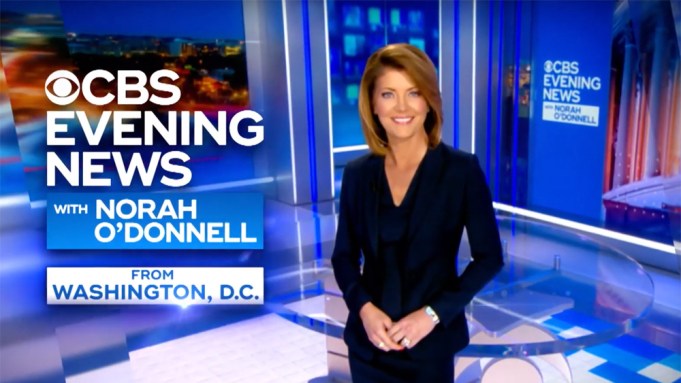 CBS Evening News with Norah O’Donnell has found a new home in Washington D.C. and the program is set to begin broadcasting from their new digs starting December.

This marks the only network evening news broadcast based in Washington. As they move from New York to D.C., O’Donnell will continue to serve as anchor and managing editor of the news program and their new home will allow her to give CBS News journalists the opportunity to be at the center of some of the biggest national and international stories of interest to Americans.

“Many stories across the country have a nexus to Washington, such as healthcare and taxes,” O’Donnell said. “We are going to continue CBS News’ tradition of original reporting and great storytelling. Our goal is to remain a trusted news leader. And this just expands our reach.”

O’Donnell was originally named anchor of CBS Evening News in May. With her on board, they aimed to have a focus on unbiased, original reporting on important stories that affect people’s lives around the world. In September, Jay Shaylor named executive producer of the program ahead of its move to D.C.

“Our move to Washington, D.C., allows Norah to bring viewers the heart of the story from the center of where everything is happening,” said Shaylor. “Being based in the nation’s capital allows us to showcase Norah’s exceptional skills as a reporter, while still bringing our audience the in-depth investigations, powerful storytelling and worldwide reach people expect from CBS News.”

The CBS Evening News with Norah O’Donnell will air weeknights at 6:30 pm ET and 10 pm ET on CBSN, the 24/7 digital streaming service of CBS News.