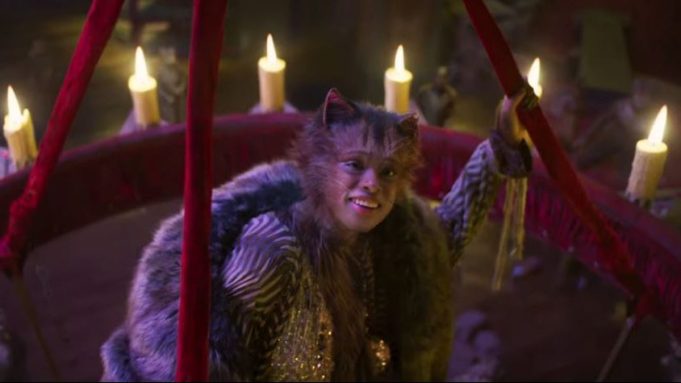 Universal has released the first trailer for Cats, its adaptation of the long-running Broadway musical. The Working Title’s pic is helmed by Les Miserables‘ Tom Hooper and has a December 20, 2019 release date.

Playing out – or dancing through – the familiar tune of “Memory,” the trailer answers at least one question that fans of the musical have been pondering, namely, how in the name of Old Possum are they ever going to be able to transform humans into film-ready felines? The answer: With incredibly intricate make-up, slinky costumes that seem to blend seamlessly into skin and digital fur. Lots of digital fur.

Until now, the studio hasn’t shown much of the adaptation – which boasts Andrew Lloyd Weber and Steven Spielberg among its exec producers and includes a cast packed with such humans as James Corden, Judi Dench, Jason Derulo, Idris Elba, Jennifer Hudson, Ian McKellen, Taylor Swift and Rebel Wilson, with Francesca Hayward getting an “introducing” credit.

At CinemaCon Hooper promised a Cats “on a much bigger scale than you can possibly imagine. We wanted to make a 2019 version that was thoroughly our own, with digital technology to create the most perfect covering of fur.”

Said Elba at the time. “I can’t wait for the world to see what we’ve been cooking up and working on secretly for the past three or four years.”

The stage musical premiered in London in 1981 and opened on Broadway a year later, with the cat-costumed cast performing songs that would become modern stage musical classics, including “The Rum Tum Tugger,” “Jellicle Songs for Jellicle Cats,” “Mr. Mistoffelees” and, most of all, “Memory,” one of few songs in recent decades to emerge from Broadway to become a popular songbook standard.

“Memory” is performed in the musical primarily by the character Grizabella, a one-time “glamour cat” who has seen better days and nights. Actress Elaine Page originated the song in London, and Betty Buckley made it her own on Broadway. The song has been performed by countless singers since, including Barbra Streisand and Barry Manilow.

Now Jennifer Hudson gets her turn. Listen to her take in the trailer above.