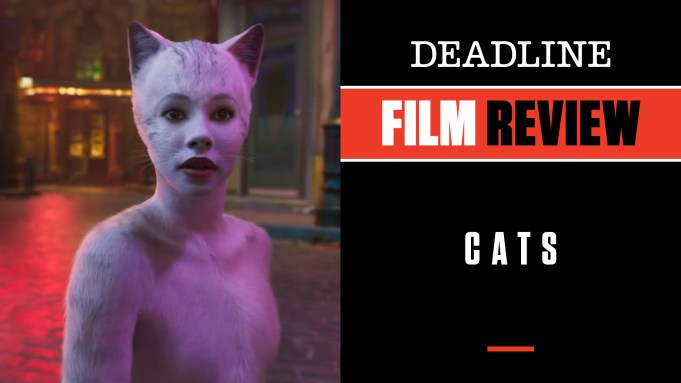 Get ready, internet haters and cranky critics who have been gunning for Cats, lying in wait since the first revelation of how it was made, because like it or not, the long-awaited movie version finally is upon us, and for this Cat and Cats fan it is a welcome treat this holiday season.

Judging by the fevered reaction to the first trailer when it hit awhile back, there will be a lot of opinions on this picture, particularly in the way the human actors morph into CGI felines. But I can only react to what I see onscreen, and I am not part of the resistance to Cats. What director Tom Hooper has done with Andrew Lloyd Webber’s Broadway smash is to bring it in all its furry glory intact to the screen. This is a highly theatrical take on the material, reminiscent in some ways of such past musical adaptations as Godspell and Ken Russell’s out-there The Boyfriend.

Make no mistake, this is a risky but expert adaptation of a property that doesn’t lend itself so easily to the unforgiving camera. But with new digital fur technology, a superb cast of actors has transformed into Jellicle cats, a ragtag group of individual felines and tomcats, street cats of all stripes, who come together in a world uniquely their own, and now ours. Or at least for those with an open mind willing to submit to it. It works for me. I liked the show. I like the film. So sue me, haters. I can’t wait to get the screener to show it to my own cats, Thelma and Louise.

The show obviously hit a nerve in order to run 18 years on the Great White Way, from 1982-2000, and countless productions ever since, but the world since has been divided into those who love it and those who hate it. Lloyd Webber has said it’s an almost plotless creation, and he’s right. This story, based on T.S. Eliot’s Old Possums Book of Practical Cats, is a group of production numbers and set pieces with Eliot’s words set to music by its composer. Despite its naysayers, who likely are as allergic to real cats as anything related to Cats the musical, it really is a brilliant creation and has been given as good a treatment onscreen as you might imagine from the man who won an Oscar for The King’s Speech and brought the musical Les Misérables to life on the big screen.

The strength of this version is in its actors, and they are all perfectly chosen and deliver on all four paws. Jennifer Hudson again gets a show-stopper (as she did in her Oscar-winning Dreamgirls role) in the hit song from the show, “Memory” (the only song not using Eliot’s words), which she simply knocks out of this world and into another. It will blow you away if you allow it too. No less extraordinary is Ian McKellen’s brilliant turn as Gus the Theatre Cat, or Judi Dench, changing gender on Old Deuteronomy and nailing it. Taylor Swift acquits herself nicely as Bombalurina and her signature “Macavity” number, as well as the one new song written for the end credits by Swift and Lloyd Webber, “Beautiful Ghosts.”

Also outstanding is the cat with all the magic tricks, Mr. Mistoffelees, who is played with great flavor by Laurie Davidson. Idris Elba brings a strong sense of menace and mystery to Macavity; Jason Derulo rules as the extravagant Rum Tum Tugger; and there are strong comic-relief numbers from James Corden, who brings it and then some as Bustopher Jones, and Rebel Wilson, here thankfully restraining her worst instincts to make a delightful Jennyanydots. Newcomer and ballet star Francesca Hayward is lovely in the role of the young innocent Victoria, who is experiencing the wonders of the Jellicle society for the first time and wondering if she can rise to the Heaviside Layer, the ultimate goal of inclusion in this society.

The choreography by Andy Blankenbuehler is right on the money, as is the production design of Eve Stewart, which recalls an old classic studio musical, blissfully as artificial and stylized as it can be. As for the much-discussed decision to take these stars and wrap them in realistic digitzed fur, you either buy it or you don’t. After about the first few minutes, I didn’t even notice. It seemed natural in its own odd way. If technology can make Robert De Niro look 30, why not let Dame Judi sprout whiskers? Watching McKellen, I was reminded of Bert Lahr’s iconic turn as the Cowardly Lion in The Wizard of Oz. This is all just advanced technology taking it further into the future, but no less engaging.

Basically Cats is an excuse for these disparate personalities — meant to be recognizable to all of us and not just cats — to sing about themselves and give us a look at them in all their self-doubts, ambition, regrets, dreams, confidence and glory. Cats will love it. So will their human counterparts who keep their hearts open.

The screenplay was adapted by Hooper and Lee Hall. Producers are Tim Bevan, Eric Fellner, Debra Hayward and Hooper. Universal opens it Friday. Check out my video review with scenes from the film by clicking the link above.

Do you plan to see Cats? Get in the conversation and let us know what you think.