As Packaging Comes To An End Today, Squabbles Over Grandfathered Projects Likely To Continue; Analysis + WGA Q&A
Read the full story
May 5, 2021 1:29pm 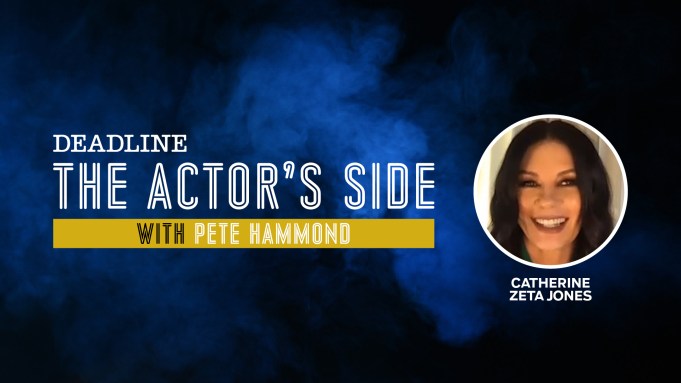 Catherine Zeta-Jones freely admits she is 51, but the Oscar- and Tony-winning star has been at much longer than most her age, having gotten her first professional showbiz job at 9 and going strong ever since. She joins me for today’s edition of my Deadline video series The Actors Side, where she talks about all of it — from the stages of Wales and London to Broadway, movie stardom and television.

Her most recent acting job is as Dr. Vivian Capshaw in the Fox series Prodigal Son, an intriguing seven-episode arc opposite Michael Sheen with whom she shares the same Welsh hometown lineage and finally has had a chance to work with. In our lively, wide-ranging conversation, Zeta-Jones talks about how she chooses a role and why the medium doesn’t matter. She even recently did one for on Facebook (!) that she is very proud of. She takes us back to the beginning, when she on a UK stage was belting out “Tomorrow” eight times a week in Annie to getting a chance to go on as a second understudy in 42nd Street in London at a show caught by its producer David Merrick, who signed her up as the lead for a two-year run — a scenario that emulates the “star is born” idea of that show itself.

Zeta-Jones also describes getting what she calls her “Willy Wonka Golden Ticket” to Hollywood, being seen in a TV movie version of Titanic by none other than Steven Spielberg, who opened the door for her casting in one of Amblin’s movies, The Mask of Zorro, opposite Antonio Banderas. It was a breakthrough moment, and she has made the most of it ever since — all the way to winning an Oscar for Chicago and a Tony on Broadway in Sondheim’s revival of A Little Night Music.

Want to hear what it is like not only to perform a nominated song on the Oscars but also to win one just 10 days before giving birth? It’s all here as well as her memories of working with so many of the greats from fellow Welshman Anthony Hopkins to Sean Connery, Tom Hanks, George Clooney and the legendary Angela Lansbury, who bonded with Zeta-Jones’ dog during every performance in the run of A Little Night Music.

She is a great interview and great fun to talk to so click on the link above to get the “actor’s side” from Catherine Zeta-Jones in our premiere edition for this Emmy season.

A new Actor’s Side will appear on Deadline every Wednesday.