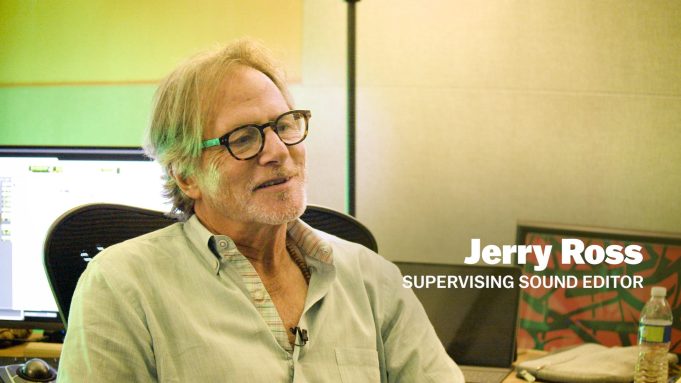 A four-time Emmy nominee back in the running this year with Hulu’s Catch-22, supervising sound editor Jerry Ross surely has one of the most interesting origin stories of anyone practicing his craft.

Thinking, earlier in life, about becoming a chef, Ross was waiting for a spot to open up at Le Cordon Bleu cooking school, when he was offered an opportunity that changed his life—the opportunity to fly to the Philippines and work on Francis Ford Coppola’s iconic Apocalypse Now.

“I got hired in the cutting room as an apprentice picture editor. Then, I was an assistant picture editor for quite a while, and then in the middle of the shoot, I got hired to play one of the surfers,” Ross recalls, in the latest installment of Deadline’s Production Value vido series. “Then, I was a sound editor for about a year—did foley on the movie, all the footsteps and everything on the boat. So, that’s where I got started in sound.”

Ultimately, working in sound proved a better fit for Ross. “Partly why I didn’t love being a picture editor as much was I didn’t really like the idea of having someone sitting over my shoulder the whole time,” he says. “The great thing about post [sound] is, we’re left to our own devices a little bit.”

Following his stellar introduction to the entertainment industry, Ross officially made the transition from picture to sound, amassing an incredible resume along the way. With credits including Dune, Big, Heathers, Awakenings, Tombstone, O Brother, Where Art Thou?, The Man Who Wasn’t There and House of Sand and Fog, the sound editor worked predominantly in features up until 2010, when he signed on to The Walking Dead.

After earning his first three Emmy nominations with his work on that AMC zombie series, Ross returned to television, with Luke Davies and David Michôd’s zany comedy Catch-22. Executive produced by George Clooney and Grant Heslov, the limited series adapts the classic Joseph Heller novel of the same name, following Captain John Yossarian, as he does everything in his power to escape unending service as a World War II bombardier.

On a period production like Catch-22, Ross’s mission is generally to create as accurate a sonic palette as possible, availing himself of every possible resource to do so. In the case of the Hulu series, he knew that the production had significant assets at its disposal—“four or so legitimate, antique B-25 bombers,” which he wanted to go and record.

The supervising sound editor’s request was denied. Fortunately, though, he had an ally on set. “Maurizio Argentieri, the production mixer, was able to record a library of incredible sound effects of these B-25s flying all around the set over the course of the whole production, and we created this phenomenal library of fresh recorded B-25s,” Ross explains, “all of their accoutrements, interiors, instruments, all the foley of each little device.”

With these recordings taken, Ross’s biggest challenge with the series had to do with ‘flak,’ “the aerial explosions that are going off around these planes at all times,” he says. “Creating this thing of pieces of metal flying, dopplerizing by us, and bombs that would hit near us, but kind of fly by,” Ross balanced all this with bomber interior sounds, along with music and different layers of dialogue.

Grateful for the opportunity to continue to practice the craft he stumbled into so long ago, Ross compares sound editing to painting. “We get to throw up some colors and paint,” he says, “and what’s really satisfying is, you feel like you’ve added something to the effectiveness of how a scene, and how the movie or show plays, by just bringing that sense of sensitivity to it.”

In addition to these collaborators, Ross would like to give special mention to re-recording mixers Dan Hiland and Todd Beckett and production mixer Maurizio Argentieri, who were integral to the success of Catch-22.  For their long-time support, Ross would also like to salute Gary Rhydstrom, Eugene Gearty, Richard King, Alan Murray and Charles Maynes.

To take a look at our conversation with Catch-22’s supervising sound editor, at his office on the Warner Bros. lot, click above.