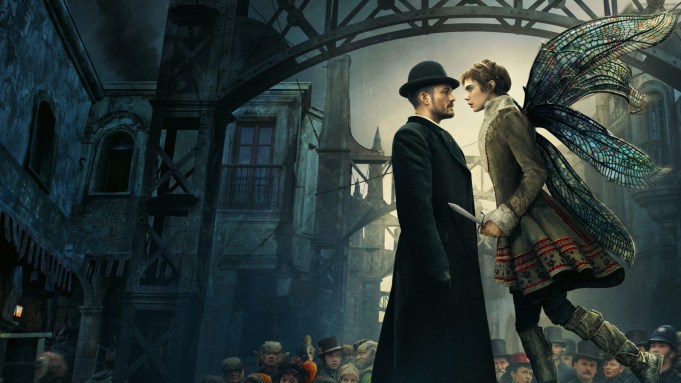 They are refugees who hail from mythology, the displaced citizenry of the supernatural, and the soon-to-be-obsolete legends of antiquity who are now running out of time — they are the exotic denizens of Carnival Row and a killer is on the loose in their midst.

The just-released full -length trailer for Season 1 the Amazon Prime Video original series Carnival Row introduces a visually striking Victorian fantasy in which Europe’s magical and mythical populations have been scattered as their homelands and hidden nations were toppled by the encroaching empires of man. The displaced — faeries, fauns, etc. — are hemmed in within the cobblestone streets of the Carnival Row district of London.

Orlando Bloom (Pirates of the Caribbean) and Cara Delevingne (Suicide Squad) star in Carnival Row,  which premiere Aug. 30 on Amazon Prime Video. The production is a major push for Amazon: Carnival Row will be released in more than 200 countries and territories when it makes its digital debut on the last day of the month. (That initial global release will be supplemented in November with dubbed foreign languages.)

From the official synopsis: “This growing [supernatural] population struggles to coexist with humans — forbidden to live, love, or fly with freedom. But even in darkness, hope lives, as a human detective, Rycroft Philostrate (Bloom), and a refugee faerie named Vignette Stonemoss (Delevingne) rekindle a dangerous affair despite an increasingly intolerant society. Vignette harbors a secret that endangers Philo’s world during his most important case yet: a string of gruesome murders threatening the uneasy peace of the Row.”