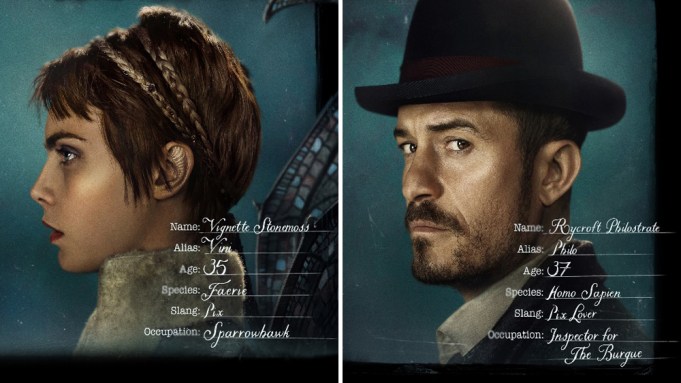 Meet Vignette and Philo. Amazon has introduced Orlando Bloom and Cara Delevingne’s Carnival Row characters in two featurettes unveiled today during the fantasy drama’s presentation at San Diego Comic-Con. You can watch the Vignette clip above and Philo below.

The eight-part series, from Rene Echevarria, Travis Beacham and Legendary Television, is set in a Victorian fantasy world filled with mythological immigrant creatures whose exotic homelands were invaded by the empires of man. The growing population struggles to coexist with humans — forbidden to live, love, or fly with freedom. But even in darkness, hope lives, as a human detective, Rycroft Philostrate (Bloom), and a refugee faerie named Vignette Stonemoss (Delevingne) rekindle a dangerous affair despite an increasingly intolerant society. Vignette harbors a secret that endangers Philo’s world during his most important case yet: a string of gruesome murders threatening the uneasy peace of the Row.

The show will launch in over 200 countries and territories August 30 with dubbed foreign-language versions launching later this year.

Executive producing Carnival Row are writer/showrunner Echevarria and Beacham, on whose feature script the project is based.