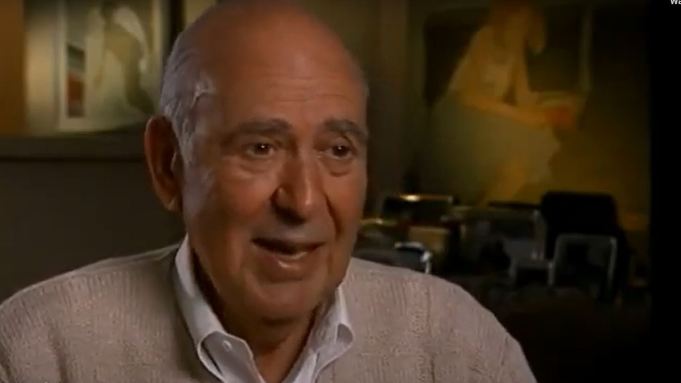 Carl Reiner, who died Monday night at age 98, set Twitter afire when news of his passing started to spread. You never know until someone is gone exactly what the impact of their life was on others. It seemed remarkable the number of people who talked about their own encounters with Reiner, the number of journalists who interviewed him more than once, the actors and writers and directors and crew members whose paths crossed with his. Not a bad word to say for this man, who is truly worthy of the names being thrown about in headlines today from “legend” to “giant.” The first thing I thought about when I heard the news early this morning was, ‘Oh, God (to quote a Reiner film title), what is Mel Brooks going to do?’ Brooks famously went over to Reiner’s house every night and they watched movies. That’s right, the 2,000-year-old man and his straight man were inseparable. There is a photo Reiner’s daughter Annie posted, taken just over the weekend as she lay on a bed between Carl and Mel, all of them wearing t-shirts that say “Black Lives Matter”. Amazing. He was with us, and with it, right to the end, even sending a final tweet about the playwright Noel Coward just hours before he passed.

Mel Brooks Remembers His Friend Of 70 Years, Carl Reiner: “Nobody Could Do It Better”

For me, I am happy to say I got the privilege of hosting the Television Academy’s (then known as the Academy of Television Arts & Sciences) tribute to Carl Reiner on October 11, 2011 when he was just a spry 89, although one of the guests who joined us on stage, Paul Reiser had to remind him of that number. Reiner was ageless, which is probably why it didn’t matter how old he was. I had previously hosted other tributes at the Academy to the likes of other legends like Betty White (with the entire Mary Tyler Moore Show cast reunited as part of it) and Bob Newhart, both fortunately still with us, but this was unique for me because I was such a fan, and not just because of The Dick Van Dyke Show, but so many of the movies he either starred in, wrote, and/or directed.

He was indeed a television giant, but when you look at what he did for the big screen, you have to say that he was one of the great comedy directors. Just look at the four films he did with Steve Martin: The Jerk, The Man With Two Brains, Dead Men Don’t Wear Plaid and a certified masterpiece with Martin and Lily Tomlin called All of Me. I was just talking with Tomlin the other day for an upcoming Actor’s Side episode and specifically brought that movie up. She said it was right at the top in her movie career. Then there was the riotous and outrageous Where’s Poppa? Add in Oh! God, The One and Only, The Comic, his first as a director the autobiographical Enter Laughing and on and on right up to an underrated Bette Midler charmer called That Old Feeling. He also wrote many of those, and also a really fun 1963 comedy, The Thrill of It All that I think contains the best comic performance Doris Day ever gave (it was directed by Norman Jewison, another certified great).

We talked about all of this in that two-hour TV Academy tribute, and we could have gone on for another two hours. At 89, or at 98 for that matter, Reiner was so sharp has spent these past few years turning out one book after another. Among those I got to welcome to fete him that night were Tomlin, his The Russians Are Coming The Russians Are Coming co-star Eva Marie Saint, Garry Shandling, Dick Van Dyke, Rose Marie, Larry Mathews (who played Ritchie on the DVD Show), and George Clooney who worked with Reiner in the all the Ocean’s films. Clooney was a surprise we hid backstage and he came out to present Reiner with the ultra-heavy award. “You write so well. You act so well. You direct so well,” he told Reiner. “You make us all feel like we’re you’re best friend.” Clooney was among the many today who put out personal words of praise for his good friend.

Reiner talked about everything that night, TV, Movies, Sid Caesar’s show. People like Steve Martin and Mel Brooks taped funny bits. However, it was right near the opening with our first guest, Reiser, that Reiner really showed how effortlessly funny he could be. Pure and simple. Here was a guy who literally did it all in show business, an icon if ever there was one for the past 70 years. He went right for it when we brought him out to a massive standing ovation. Reiser told how he was desperate to get Carl to do his show, Mad About You, and came up with the idea to have him revive his self-centered Alan Brady character that he often played on The Dick Van Dyke Show. It immediately made Reiner think of a story, as just about anything did. “I am going to give a piece of information that sounds like it’s a self-aggrandizing piece of information, but up until the time I did your show Paul I had won 11 Emmys. But I have three children. I said when the time comes, and I pass my Emmys to my kids, I said ‘ how do I do that?”,” he laughed knowing someone would get the short shrift. “This is the absolute truth. I won a Guest Emmy for that show and I said to my wife, ‘ I got that 12th Emmy!'” He turned to his daughter in the audience and assured her she would get her fair share of those Emmys.

When I asked what it was like to work with Reiser, Reiner replied, “It’s hard to say because if I don’t say something funny it’s going to be so f*cking boring!” He then turned to me and complained, “As far as questioning, see that wasn’t a good question. I NEED better questions.” He got a laugh and I threw him a “better” question, one that ultimately led to a description of everything you might need to know about what made Carl Reiner tick: writing. Pure and simple, right from the start, as he kept alluding to in many stories at that tribute. It was always writing.

“When I came here tonight I was at my computer working on a book called I Remember Me. It’s a memoir and I am about 280 pages into it. And I realized I was going to come here and be lauded. But believe it or not, until the last second I was typing and I said ‘I gotta go’ and I typed another page or two believe it or not. That interested me more,” he said. “This is exciting but it’s a memory. After it is over I’ve got nothing but a memory. But after I finish a page, it’s a page that I own, that I can read, that I can send out. It’s true. I get up in the morning, I’m what, what am I? 89? I am so pleased that I still have that portion of my brain that I can write. And I can’t wait to get to the typewriter – OK, it’s a computer. And that’s my life right now”

He was with us, and with it, right to the end, tweeting out words and thoughts just hours before he passed away Monday night of natural causes. It was something he could send out. The world, such as it is, was a better place thanks to everything Carl Reiner sent our way.

Click on the link at the top of this post to see the TV Academy tribute to a true legend.