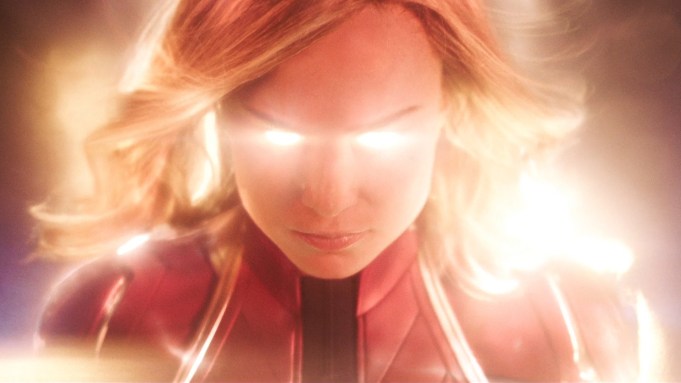 It is certainly not in the league with Black Panther, but Marvel set the bar for superhero comic book movies pretty high with that Best Picture Oscar nominee, the first of its genre to be so honored. Still, I expected a little more from Captain Marvel, which stars Brie Larson as the first female Marvel character to front her own movie, a significant cultural milestone just as Black Panther was. This is, after all, a character that started out as a man in the 1967 comic books, before finally morphing into full womanhood in 2012 as Carol Danvers aka Vers aka Captain Marvel.

Steering the ship is the indie filmmaking team of Anna Boden and Ryan Fleck (Half Nelson), who step out of their comfort zone to command this project as co-directors and handle the requirements well, even if the results are less than what we hoped — especially after seeing DC’s Wonder Woman explode on the screen with a magnetic Gal Gadot and sharp direction from Patty Jenkins. That clearly was a tough act to follow, and Captain Marvel is a bit too all over the place to match it. In terms of wit, it is no Guardians of the Galaxy, though it tries. In terms of action, it is no Avengers: Infinity Wars, though it promises to be a key part of Endgame (stay through all of the credits). And in terms of social relevance, you don’t just stand up and cheer like the breakthrough genre-bending achievements of Panther and Wonder Woman.

That said, Captain Marvel does have Larson, and that’s a very good thing, even if I wish she had a more fleshed-out presence here. Whatever complexity is left to quick flashbacks that try to glue the pieces of the puzzle that brought her to the point of being this dynamic intergalactic warrior with her pulse on the light that can change the world. A member of the Air Force and then Starforce, she gained her powers through a mentor named Lawson (Annette Bening), whose light-speed device is the much desired object of the bad guys, the Skrulls — green, lizardly aliens that look like they stepped out of a 1950s Universal monster movie. Talos (Ben Mendelsohn) is their titular leader and apparently a very good impressionist as he seems to become just about anyone or anything. The Kree are their rivals, led by Yon-Rogg (Jude Law), who first is seen running Vers through rigorous training exercises at the beginning of the movie and serves as the guy trying to keep her eyes on the prize as it were. That’s one of many familiar tropes in epics like this.

After that, there is a large battle sequence, topped only by others strewn throughout until the nifty finale, which should keep actions fans happy. Oddly you are never quite sure where you are in this film — whether it is otherworldly intergalactic encounters like that or back on Earth circa 1995, where Vers crash-lands into a Blockbuster store and confronts a lone security guard to ask where she can find the necessary equipment needed for her mission. He points to RadioShack next door. That’s one of the humorous highlights in the script from the directors and Geneva Robertson Dworet. I mean, yeah, I chuckled, but sexist lines from an Air Force colleague to Danvers like “Why do you think they call it a cockpit” are cringe-inducing in a family picture being released by Disney. And speaking of that, this Marvel flick has been Disney-fied to the point of adding a cute cat named Goose (played by four felines), and quite frankly the cat steals the show. Do you remember Disney’s 1970s comedy The Cat from Outer Space with McLean Stevenson? I didn’t think so. I digress.

Weirdest thing is this stew is the arrival of Marvel stalwart Nick Fury, with Samuel L. Jackson now eerily de-aged by about 25 years, and it’s kinda creepy to see. For those who are waiting for Avengers: Endgame, you absolutely know on the basis of the Infinity War end credits that Fury and heretofore unseen Captain Marvel will figure heavily. The rest of the cast including Clark Gregg, Djimon Hounsou, Gemma Chan and Lashana Lynch are all fine, the latter playing a key part in solving the mystery of Vers’ human past as we see how she lived in quieter times. Other than Goose, Mendelsohn knows how to steal scenes, and I only wish Bening had more to do than play something of a Supreme Intelligence in a God-like manner.

Still, it’s fun for fans, a place-setter for Endgame, and if you don’t care about seeing Marvel raise the bar past Black Panther, you will get your money’s worth. A real highlight, though, is the newly reconfigured Marvel logo at the beginning, which is a winning tribute to Stan Lee. He also makes a familiar brief Lee cameo in this one as well. Kevin Feige produced. Disney releases the film Friday, and it will make a fortune, obviously. Check out my video review above with scenes from the film.

Do you plan to see Captain Marvel? Let us know what you think.