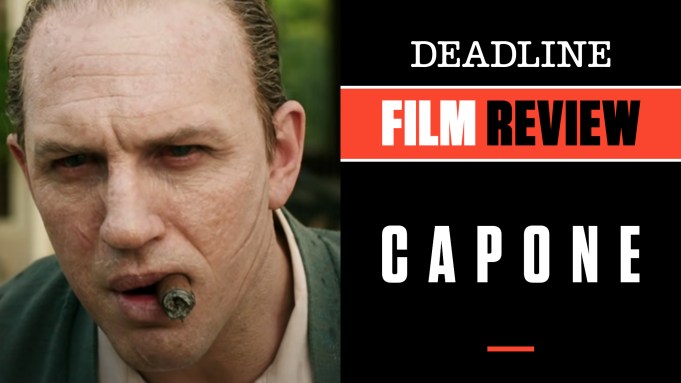 In 1986, huckster reporter Gerald Rivera staged a hyped, bloated, two-hour TV special called The Mystery of Al Capone’s Vault, tantalizing viewers with what treasures might be buried there. When it was finally opened, there was nothing, a big con that led nowhere. That almost describes this new film, Capone, which also leads nowhere, as writer-director Josh Trank is trying to come back from movie jail after the disaster of his 2015 Marvel loser Fantastic Four. He has chosen to dramatize the famous Chicago gangster’s final year, when Capone was in the throes of dementia, incontinence, neurosyphilis — you name it — and whatever else as the government sent him into exile after an 11-year prison sentence for tax evasion. Clearly that time in the slammer did a number on him, and the man who emerged, as least in the hands of Trank and his star Tom Hardy, is just a shell of what he was, drifting into flights of fantasy for the good ol’ days when those he disapproved of could be stabbed 35 times in the neck among other bloody encounters.

Hardy’s heavily made up, scarred face looks just like that — a makeup job — and whether due to a stroke or whatever speaks in incomprehensible language that only gets easy to understand when he occasionally lunges into Italian and subtitles are provided. Hardy’s vocal work here actually makes his Bane, the Dark Knight Rises villain who spoke behind a facemask, seem like the model of elocution.

Plotwise, what we have is pretty thin material. Capone is exiled to his Florida mansion, there is a revelation that he may or may not have a son not previously known, and the feds are monitoring him closely because he believes he buried $10 million (well over $100 million today) somewhere but is so out of it he can’t remember where — or so he mumbles. He tends to roam around in a bathrobe and adult diapers, particularly in an elongated scene near the end where his delusions have him brandishing a solid gold Tommy gun and shooting up the residence like the glory days. Of course it is all a dream-like situation for the most part, kinda like Dorothy’s trip to Oz, which BTW has also been thrown into this stew as Fonz (short for Alfonso and the name everyone calls him, not to be confused with the Fonz, of course) enjoys a sing-along at one point watching The Wizard of Oz and joining in on “If I Were King of the Forest” with Bert Lahr’s Cowardly Lion. Yes, Trank (who also edited) actually cleared the rights to use that movie. Along the way there are a few fantasy sequences taking us back to a more recognizable Capone, who actually died at age 47 but here looks 30 years older at least. This is certainly Hardy’s show, no question, but Trank has attracted an impressive supporting cast that is largely wasted. Matt Dillon plays an old mob friend named Johnny, Kyle MacLachlan is a corrupt doctor who suggests Capone try carrots over now verboten cigars, Linda Cardellini has little to do as Mae his wife, and Jack Lowden is an FBI agent who interrogates him, among others.

A lot of fine actors have tried their hand diving into the Capone legend at various points including Rod Steiger, Robert De Niro, Ben Gazzara, Jason Robards and more with varying degrees of success, but none of them were stuck just in the last year of the guy’s existence. This gives Hardy license to turn to Method acting, proving in this case there is “method” to madness. It all seems though like a bit of cruel joke at the expense of what dementia and failing faculties can do to any of us — no laughing matter there but hard to take seriously in this context. Hardy is too good an actor (when he has the right vehicle) not to know better. The violence, common to all gangster movies, is not organic and so seems all that more exploitative and without point or even entertainment value.

Vertical Entertainment was planning a theatrical release but instead opens this on VOD and digital on Tuesday, perfect for being confined at home just like Capone himself. Producers are Russell Ackerman, Lawrence Bender, John Schoenfelder and Aaron L. Gilbert. Check out my video review above with scenes from the film.

Do you plan to see Capone? Let us know what you think.