Continue to Deadline SKIP AD
You will be redirected back to your article in seconds
Skip to main content
November 15, 2018 5:25pm 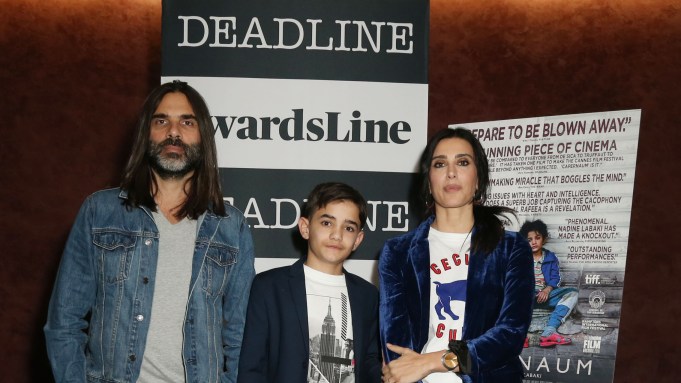 Watching Capernaum, Lebanon’s entry in 2018 for Best Foreign Language Film, one point becomes immediately clear: Only a truly dedicated, humanistic director could make such a film, experiencing first-hand so many sorrows so that others around the world might understand. In the case of the Cannes title, which won the fest’s Jury Prize, that director is Nadine Labaki, an esteemed Lebanese filmmaker who had already made her way down the Croisette a number of times before. Based on the director’s experiences in her home country, seeing children become a ubiquitous presence on the street, the social drama follows 12-year-old Zain (played by real-life Syrian refugee Zain Al Rafeea), an abused and neglected child who has had to grow up much too fast, serving a five-year sentence for a violet crime, while suing his own parents for the very act of bringing him into the world.

Sitting down with her young star last night—along with producer/composer Khaled Mouzanar—following an Awardsline screening of the film, Labaki reflected on the anger, frustration and sense of responsibility that pushed her forward in her work. “At the end of the day, those children are really paying a very high price for our conflicts, and our wars, and our systems, and our stupid decisions, and governments,” she said. “I felt the need to talk about the problem, and I was thinking, if those children could talk, or could express themselves, what would they say? What would they tell us, this society that ignores them?”

One of many stunning non-pressional actors that populate the film, Al Rafeea was feeling the pain and suffering of his character (who took his own name) precisely because he had been in the exact same places himself. “Zain…never went to school because his parents couldn’t put him in school. The only difference from the film is that he has loving parents. But still, they couldn’t give him what he needed,” Labaki said.  “Zain grew up on the streets; his school was those streets, [and] he knows the violence of the streets.”

Using street casting for the sake of authenticity, producer Mouzanar found that the main challenge the production posed was time. “We knew from the beginning that we needed a lot of time to reach this result, so that’s why we decided to produce the film ourselves,” he noted. “We had six months of shooting. We are still not out of it, I think.”

A quiet presence throughout much of the night’s panel, Al Rafeea also made one of the night’s most important points, courtesy of Labaki’s translation. “If parents are not able to raise their children properly, they shouldn’t have them—and the government should also help,” he said. “Because it’s also the government’s fault.”