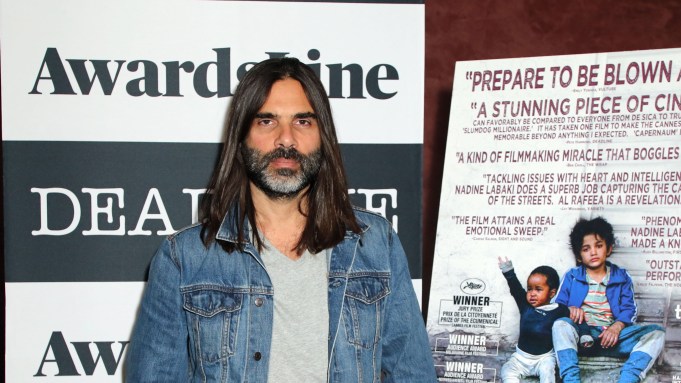 EXCLUSIVE: Three years ago, Lebanese composer Khaled Mouzanar set out on Capernaum, with no real idea where the film would take him. Directed by his wife, Nadine Labaki, the drama centers on Zain, a 12-year-old Lebanese boy serving a five-year sentence for a violent crime. Taking his own parents to court, the child sues them for their abuse and neglect. In the mind of this fiercely intelligent and angry young man, the very fact that he was brought into the unforgiving world he sees around him is a crime, and should be treated as such.

Featured in the exclusive video above, the composer was on board this film from the get-go and even came to produce it, purely out of necessity. “I started the film without knowing anything about how to produce. We just knew while we were working on the script that no producer would ever accept [the offer to] produce such a film, the way we wanted to do it, [and] the only solution for us was to make it on our own,” Mouzanar tells Deadline. “We started without even having the financing, and we ended up putting our home on mortgage to start the film.”

For the multitalented artist, Capernaum was a project that meant more and more over time. “Capernaum swallowed me like a devastating hurricane, destroying everything in its path, rewriting my beliefs, my views, and enlightening my principles. I was under its spell,” he admits. “This film changed me as a person, as a father, and as a musician.”

Largely taking his sonic inspiration from the script, Mouzanar spends a long time honing his melodies, feeling that it’s music that “should keep the film alive in the brain and soul of the audience, long after they have seen it.” In his approach, writing music is a “physical and organic experience,” where he works “like a craftsman, with my own hands, recording, playing and mixing most of the instruments, [and] even building my own preamps with recycled old machines to reach the sound that I want.”

Shot in a “quasi-documentary style,” Capernaum called for music that was emotional but not saccharine, true always to the “sacred reality” of the Lebanese experience. Crafting the film’s sound, Mouzanar started out with a string quintet and a violin soloist, elements which on their own felt “too civilized.” He then incorporated a broad range of Ethiopian and African instruments—ranging from the masenqo and the kraal, to the mizmar and the daf—to evoke “the feel of a divine curse on this underground city.” Living with the film for years, Mouzanar came to see it as “a futuristic prophecy, a quite mythological, human, modern fresco,” that should have a “biblical, lyrical and contemporary” sound.

While Capernaum is very much a film about Lebanon, and the country’s specific challenges, it also has its eye on people around the world, who are doing their best to survive and live well with whatever limited resources they have. “When I started plunging into this realm, this underground city appeared to me like it could be the underground of Mexico, of New Delhi. In 50 years, with global warming, and shifting migration from the south to the north, eventually all the big cities in the world will have a Capernaum within their suburbs,” Mouzanar reflects. “This is not just a localized issue.”

Cut down to a 2-hour running time, Capernaum was once 12 hours long. Daunted by the scale of this vision, the composer approached the project “like a mountain climber,” looking straight ahead and “climbing step by step.” And while his perception of the film changed in a number of significant ways over time, the most important shift came in recognizing the true, wild nature of his main character, Zain. “I had imagined a cute little child and wrote music according to that image, and my first encounter with Zain made me rewrite and rethink the music. I knew I couldn’t be as melodic or sensitive [as] I had imagined while reading the script,” Mouzanar shares. “Seeing the chaos and the hell of these slums was not like reading them on paper. The music had to carry their smell.”

At each step along the international circuit—from its Cannes debut onward—Labaki’s latest has been a major success. It took three awards, including the Jury Prize, at the prestigious French festival, most recently earning a Golden Globe nomination for Best Motion Picture – Foreign Language. With an eye toward Oscar’s Best Foreign Language Film prize—after earning its place on this year’s shortlist—Capernaum has also been submitted in the category of Best Original Score.

For a look at Mouzanar’s process on the Sony Pictures Classics release, take a look above.