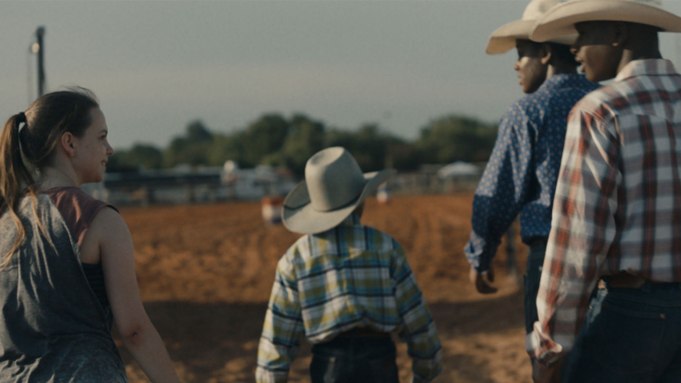 After winning the Cinefoundation Award at Cannes five years ago for her short Skunk, Annie Silverstein returns to the Croisette with her feature directorial debut, Bull, a project which builds on the lone adolescent survival themes established in that 16 minute film.

Silverstein’s edge is how she pulls the moviegoer in with the subtlety of her characters as they move through their environment, not unlike the nuances observed in the works of Terrence Malick, Nicolas Roeg, and even Theo Angelopoulos to a degree. The opening shot of Bull? A rottweiler-bull dog mix chomping down on the rodeo neighbor’s (Rob Morgan) live chicken: We’re in the wild outskirts of Texas now.

While Skunk dealt with a 14-year old girl crusading against the amateur dog fighter who stole her pit bull, Bull also centers around a 14-year old, Kris (Amber Havard) who is on the precipice of potentially following in the awful footsteps of her incarcerated mother in an opioid addicted rural Texas community. She finds an oasis and a mentor in ailing Black rodeo rider Abe (Morgan). Silverstein was inspired to spotlight the life of Black cowboys, protagonists rarely seen on the big screen.

Here in our sitdown with Silverstein and Morgan, they discuss what drew them into the project, with Brooklyn-based Morgan (Netflix/Marvel’s Daredevil) expounding how he prepped for the rodeo life.

Says Morgan about what makes rodeo riders tick, “I think it’s the rush. It’s like motorcycle gangs, what they get out of riding motorcycles down the highway. These brothers and sisters get a rush from saving a life of a cowboy, by confronting a bull.”

Bull is playing in the Certain Regard section at the festival. Bert Marcus Film is the main financier and producer. 30WEST provided partial financing and is handling domestic sales. Film Constellation is handling overseas sales.