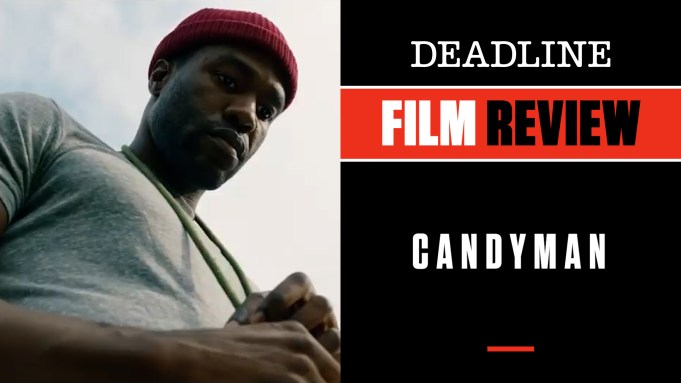 Although it didn’t enjoy the cinematic lasting power of the endless iterations of the likes of Michael Myers, Jason or Freddy to name three horror icons, the 1990s boogeyman Candyman produced a cult following and sleeper status all its own. Now it is getting a new chance at cinematic mortality with what is essentially a reboot, original title intact, rather than a remake of the 1992 original that starred Tony Todd in a memorable take on the scary guy whose name you do not want to repeat five times while standing in front of a mirror. That particular film drew a couple of forgettable sequels on its own, but now, thanks to some smart filmmakers who get what made the idea tick in the first place, it is back for a 30th anniversary update, or rather rediscovery.

In the ’92 version, Virginia Madsen played Helen Lyle, a researcher who becomes obsessed with digging into the legend and myth of this frightening figure with a hook for a hand who haunted Chicago’s run-down public housing project Cabrini Green. The film was ahead of its time in terms of using the genre to bring up issues of systemic racism and social injustice. Years later, films like the Oscar-winning Get Out and Us from Jordan Peele would win acclaim for weaving serious issues for Black America into the annals of horror, so it is no surprise after his dalliance in bringing back The Twilight Zone that Peele’s name would show up here as a producer and co-writer with director Nia DaCosta, who has done a very stylish job not just in successfully bringing this character and story back to life for a new generation, but also in making some pertinent points about how far we haven’t come in dealing with the racial divide. Further, the brilliant use of black shadow puppetry, weaving in and out of the movie, powerfully tells the story of Black oppression through the years as a counterpoint to the live action on display.

Now the year is 2019 and the focus is on a couple — Brianna Cartwright (Teyonah Parris), an artists agent, and her artist-partner Anthony McCoy (Yahya Abdul Mateen II) — living where Cabrini Green used to be, in a nicely appointed apartment, as they make their way in Chicago’s art world. However, Anthony comes upon the legend of Candyman and, like Helen Lyle before him, becomes increasingly obsessed with all things Candyman, particularly in his paintings, one of which, called “Say My Name,” soon goes viral as it becomes connected to a series of murders of mostly white young women. McCoy, pleased with the attention after going through a downward spiral in his career, starts a new wave of intense artistic efforts that become darker and more menacing, with strange things also happening to his body after a visit to what remained of the original Cabrini Green. Yes folks, he is starting to take on something of a mirror image of this very feared killer, but is it real or just psychological? An encounter with Burke (Colman Domingo), who as a child claims to have had a run-in with the eponymous boogeyman and been affected ever since, works as a device for filling in details of the story with which he becomes entangled.

Mateen proves he has a natural screen presence here and serves the reboot well, as does Parris. Also notable in the cast are Nathan Stewart Jarrett as Brianna’s brother; Rebecca Spence as a snooty art critic who suddenly (and cynically) takes an interest in Anthony’s work once it gets press attention; and Vanessa Williams and Todd himself, both refugees from the ’92 film, making brief but impressive impressions here as well.

Win Rosenfeld and Ian Cooper join Peele as producers. Universal, which releases it Friday, MGM and Bron are key production entities — with their opening logos coming on in reverse, this Candyman signals with a wink that we are in for a very smart ride. At the back of the end credits filmmakers provide information on how to get involved in taking on racial injustice.

Check out my video review above with scenes from the film. Do you plan to see Candyman? Let us know what you think.