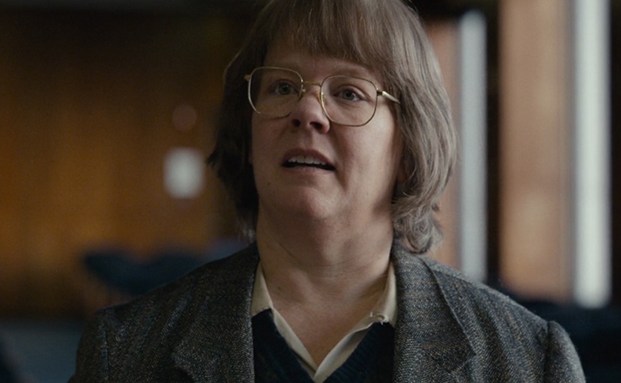 When you see the name Melissa McCarthy you probably think of SNL, Mike and Molly, her highly successful comedic movies like Spy, The Heat, The Boss, and a rare Oscar nomination for a broad comedy role in Bridesmaids. What you likely don’t associate with her are the words: dramatic actress. But make no mistake, even though there are definitely moments that make you laugh in her new film, Can You Ever Forgive Me? they are solely coming out of the real-life character, Lee Israel, that she plays here. As I say in my video review (click the link above to watch) McCarthy is a marvel, a complete revelation as she goes deep into the fractured soul of this New York City -based author of celebrity biographies who, though once modestly successful, now finds herself on the outs when no one seems to care to publish her latest work on Fanny Brice, and she doesn’t even have enough money to take her sick pet cat to the vet.

The crux of the story, adapted from Israel’s book by screenwriters Nicole Holofcener and Jeff Whitty and wonderfully directed by Marielle Heller, centers on a get-rich-quick scheme Israel stumbles upon while doing research on her book at a public library, where she unearthed a couple of genuine letters written by Brice. She pockets them and takes them to a memorabilia dealer who eagerly buys them. This is where she gets the idea of forging letters from dead celebrities who aren’t around to challenge their authenticity, including Noel Coward and Dorothy Parker, and soon she has a thriving business going to a select group of dealers and selling her fakes. In real life, Israel forged more than 400 letters in a fraud that got her in deep legal trouble.

Joining her in this charade is Jack Hock (Richard E. Grant), another lonely NYC gadfly she befriends and enlists in helping her sell her wares. Lee and Jack are bar mates and also both gay, looking for something solid from their lives, which are at a low ebb. Together they have found oddly kindred spirits and renewed hope with this scheme. Long an underrated actor, Grant proves he is among the very best of the British thesps, playing this street bon vivant with everything he’s got. He and McCarthy are terrific together and, if there is any justice, both deserve Oscar nominations. The supporting cast of characters is equally good, if given far less screen time, and include a who’s who of Big Apple actors including Jane Curtin as Lee’s agent, Dolly Wells as a sympathetic buyer, McCarthy’s husband Ben Falcone and Stephen Spinella as memorabilia dealers and Anna Deavere Smith as Lee’s ex-partner.

Heller is able to build a surprising amount of suspense into all this as Lee’s too-good-to-be-true plan starts to unravel when suspicions arise to the authenticity of the letters she is hawking. At its heart, Can You Ever Forgive Me? is a compelling and enormously engaging character study of a personality who’s very difficult to warm up to. McCarthy isn’t afraid to make Lee Israel unlikable and certainly irascible and frustrating in many ways, but oddly I found myself rooting for her to succeed in a city that rarely forgives. Heller uses these NYC locations to the best advantage, making a movie as much about New York as it is about some lonely souls who inhabit it. The real Lee Israel didn’t live to see her story come alive onscreen (she died in 2014), but I have a feeling she might have very much liked the way McCarthy brought her roaring back to life. This is one of the year’s best pictures. Producers are Anne Carey, Amy Nauiokas, and David Yarnell. Fox Searchlight opens it in limited release Friday.

Do you plan to see Can You Ever Forgive Me? Let us know what you think.