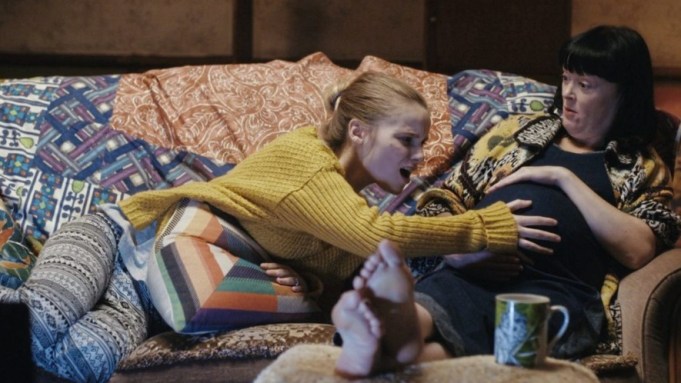 Set for Toronto’s Discovery strand, the mother-daughter relationship feature marks the debut of director Shelly Love and it had an all-female creative team including first-time screenwriter Tess McGowan, producer Louise Gallagher (Made in Belfast) and executive producer Roma Downey. Bronagh Gallagher (The Commitments) stars with Peticrew.

Set in Derry, Northern Ireland, the film centers on Pamela (Gallagher), a fun-loving single mother whose lonely, buttoned-up teenage daughter Allegra (Petticrew) disapproves of her lifestyle. Their relationship is further strained when the forty-something Pamela becomes pregnant after a one-night stand with a plumber half her age who is not ready for fatherhood.

Great Point’s Nada Cirjanic said, “Shelly and Tess playfully lay out how different generations of women relate to each other, and what we really want from love and from friendship. International audiences will love the warm relatable story at the heart of A Bump Along The Way.”

Gallagher Film produced with financing from Northern Ireland Screen and Yellowmoon. The script was developed under Northern Ireland Screen’s New Talent Focus Scheme, as well as its New Writer Focus Scheme which also produced A Bad Day For The Cut and The Dig. Element Distribution will release the film in Irish cinemas on 11 October 2019. UK rights are also off the table.