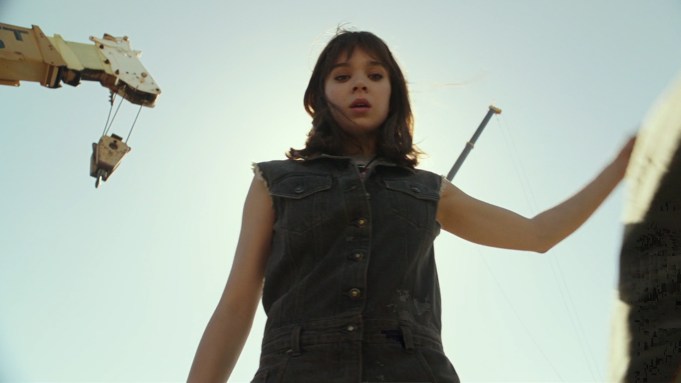 After five bruising and very loud Transformers movies, each with diminishing returns even for fans of the Michael Bay-directed series, I assumed we were done with the toy-turned-franchise. Well, it turns out Bay was done, but the series lives on in another form as a prequel and origin story for its most lovable piece of heavy metal, Bumblebee, the B-127 robot disguised as a Volkswagen.

Considering my lack of admiration for the previous editions, I had zero expectations for this one despite the fact it had a new, and very talented, director at the helm in Travis Knight (Bay is just taking a producer credit this time). Knight seemed an unlikely choice since his Laika operation in Oregon is all about stop-motion animation with gems like Caroline, ParaNorman and his directorial debut Kubo and the Two Strings. Yet here he is behind the camera for this live-action take on just how Bumblebee came into this world. And guess what? It is surprisingly entertaining, engaging and even emotional as Knight has moved the series more into the Spielberg arena, or a movie like Short Circuit.  It’s the time-honored a-boy-and-his-dog formula, except in this case the boy is a girl named Charlie (Hailee Steinfeld) and the dog is a yellow robot all dressed up as a VW beetle.

The film does start out on a bad note, resembling any number of Transformers movies dealing with the ongoing strife between the Autobots and Decepticons (including a cameo from Optimus Prime). Quickly shifting, though, to a California town circa 1987, we see B-127 is on the run, sent to save Earth for the Autobots, and crash-lands in the Bay Area where he finds his disguise as a beat up old VW that young Charlie comes upon, determined to fix it up in honor of her late father. The film largely focuses on their budding relationship, plus her family life — including Mom (Pamela Adlon), Mom’s boyfriend, and her precocious little brother Otis (scene-stealer Jason Drucker). There’s also a nice boy her age (Jorge Lendeborg Jr.) and a budding relationship there.

Meanwhile, because of Bumblebee, they are being pursued by Decepticons Dropkick (voiced by Justin Theroux) and Shatter (Angela Bassett). John Cena also turns up as Jack Burns, a Sector 7 commander who couldn’t keep Bumblebee in his sights and is also on the trail on behalf of the government. The whole thing has a certain sweetness to it, perhaps because it is fronted by a female for the first time, and Steinfeld really knows how to make this all seem plausible. She’s awfully good as she tries to bring Bumblebee, who has lost his voice and memory in the process, back to normal life.

If it reminds you of Spielberg’s E.T. in a way, that is because Spielberg remains an executive producer on the Transformers films and this spinoff. Whatever the decision to change up the formula, it’s a good one as this is easily the best TF movie yet. A lot of that credit has to go to Knight, who brings his well-demonstrated sense of character development to the fore here and proves adept in this format, aided by a fine script from Christina Hodson. The special effects are especially good this time around.

Do you plan to see Bumblebee? Let us know what you think.