Continue to Deadline SKIP AD
You will be redirected back to your article in seconds
Skip to main content
January 5, 2021 12:42pm 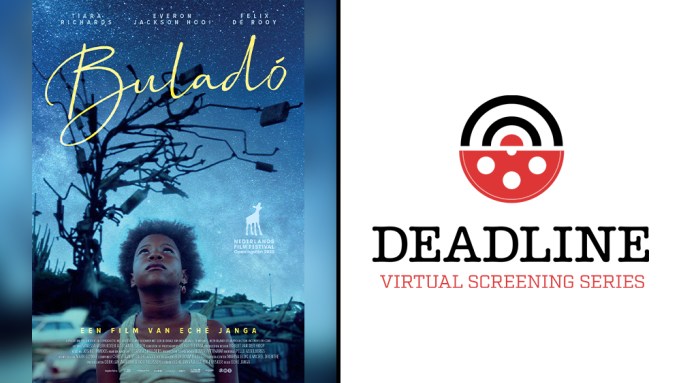 Filmmaker Eché Janga went back to his roots for his sophomore feature, Buladó, a drama set in the Dutch Caribbean island of Curaçao, the native land of his father.

“For me, it was really exciting because I am a Dutch person,” Janga said at Deadline’s Virtual Screening Series. “So although I have a link to the Island and my family still lives there, I had the feeling I need some approval from the people from Curaçao that I could make a film about their country, about their culture. I was really delicate with the use of their culture.”

Written by Janga and Esther Duysker, the pic centers on Kenza (Tiara Richards), a headstrong, 11-year-old girl raised on a junkyard in Curaçao stuck between two worlds: her rational father and spiritual grandfather. Kenza searches for a connection with her deceased mother in a quest to map her own path into adult life.

“When I wrote the first draft, Kenza was actually a boy because I’m a man it’s easy for me to write,” Janga shared, crediting co-writer Duysker with coming up with the idea to make the main protagonist a girl. “It’s much more interesting for a culture where machismo is really alive in Curaçao in the Caribbean — how is a girl growing up between this manly, masculine vibe?” He added that he wanted to show another side of women from the culture. “Girls growing up in Curaçao are mostly expected to be girly girls. Maybe it was good to show another side of being a woman,” he said.

Janga recalled seeing the film for the first time on the big screen. “I shed a tear in a certain scene because, of course, the father has a lot of resemblance with my father and the grandfather with my uncle and the girl with my sister. So for me, it was really special to see for the first time in a theater. I felt for the first time the emotions of the film.”

Last year, it was announced that Buladó would the official Dutch entry for the International Feature category at the 93rd Oscars.

“When I heard Buladó was sent in for the Oscars, actually for me it was really big,” Janga said. “But I was immediately thinking about Curaçao because it’s a country which has a lot of problems, and this will set Curaçao on the map. Also for them, that is huge … it’s very special having a film in Papiamento [language] in America.”