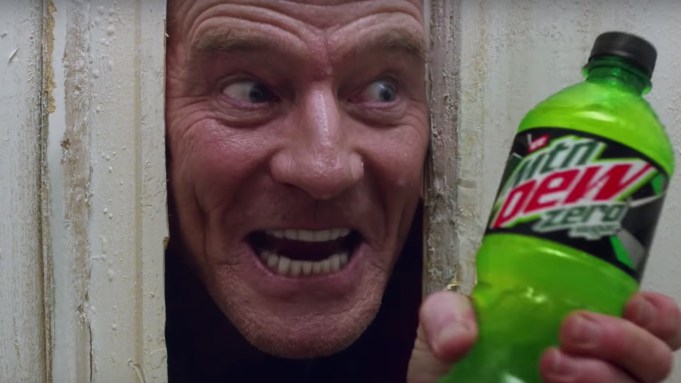 In a pitch-perfect re-creation of The Shining‘s famous “Heeeere’s Johnny” scene, Cranston and Ross take on the Jack Nicholson and Shelley Duvall parts to unveil the new soft drink’s “As Good As the Original, Maybe Even Better” campaign.

The 30-second in-game spot will air during Super Bowl LIV this Sunday, February 2 as part of a multi-platform campaign that was teased on Instagram earlier this month with a post that played off The Shining‘s “All Work And No Play…” typewriter scene (watch it below).

Finally on Sunday, The Shining‘s creepy twins get their Dew with a TikTok presence and an augmented reality Snapchat filter that allows users to superimpose themselves into the new commercial’s ghost sisters scene (get a very funny preview by sticking around till the end of the 30-second spot above).

Erin Chin, Senior Director, Marketing, MTN DEW, said the splashy new spot will launch the brand’s Zero Sugar product. “We partnered with two major Hollywood actors to help us tell that story on one of the world’s biggest stages,” she said in a statement. “We hope fans will enjoy the unexpected humor and fantastic casting. Tracee and Bryan had incredible chemistry and the energy on set was dynamic.”

Check out the Super Bowl spot above, and the typewriter teaser below.