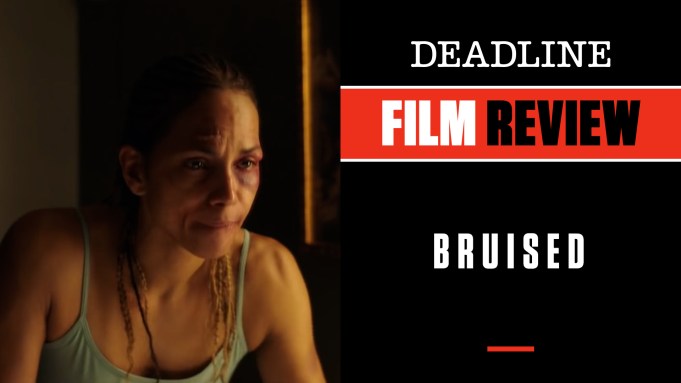 Halle Berry’s feature directorial debut, Bruised, actually premiered at the 2020 Toronto International Film Festival as a “work in progress.” It was picked up by Netflix with the idea of completing the film as close to Berry’s initial vision as possible. More than a year later, the finished pic has premiered at yet another film festival, the 2021 AFI Fest, with its unveiling in Hollywood tonight. It will open Wednesday in select theaters, followed a week later by its streaming debut on Netflix.

Bottom line is there is no question Berry has thrown it all against the wall with this one and acquitted herself admirably, not just as you might expect acting-wise from the Oscar-winning star of Monster’s Ball but also behind the camera. She keenly navigates a female-driven story of a disgraced MMA fighting superstar trying to claw her way back to the top while putting the pieces of her shattered personal life back together. This is a genre previously dominated onscreen by men, so no matter the flaws of an overlong film that tries to stuff too much story into a two-hour, 15-minute runtime, it is refreshing to see it presented from a female POV — not just with Berry in the directing chair and lead character but also with screenwriter Michelle Rosenfarb, who created the idea that initially was written for a 21-year- white Irish woman.

When Berry got hold of the script she knew a major change would have to occur in order to play it instead as a middle-aged Black woman. It certainly takes on a different sort of urgency for the main character, Jackie Justice, who was drummed out of the ring amid scandal years before. Her life becomes a bit of a shambles, but her boyfriend, Desi (Adan Canto), sees an exploitative opportunity to push her back into an underground fight, a brutal one, which turns fortunate when Immaculate (Shamier Anderson) spots potential to get her back into the big time and back into the Octagon.

Complications arrive when Manny (Danny Boyd Jr.), the boy she put up for adoption as a baby, comes back into her life. He is now a soulful young boy who doesn’t speak, and his appearance only brings her own self-doubts about the meaning of motherhood and responsibility. The story then changes focus between fights in and out of the ring, including fierce conflicts with mother Angel (an excellent Adriane Lenox), the building problems with Desi and a complex relationship with trainer/coach Buddhakan (a stunning Sheila Atim) that turns romantic and complex, further making Jackie deal with her feelings long bottled up. One thing this drama has in common with so many boxing flicks that have come before is that it all eventually comes down to, ahem, a bruising battle in the ring.

Berry, who certainly impressed when she kicked ass in John Wick 3, actually went straight into this role from that and she has earned her action stripes , at 55 (!) — somehow proving believable and adept as an older, washed-up MMA fighter who strives to show she can still do it against all odds. You gotta give Berry credit.  Into the mix she delivers a rounded, three-dimensional turn as a woman emerging from past mistakes to take herself into account and turn her life around. Berry certainly knows a strong role when she sees it and clearly wanted to protect it by jumping into the directorial ring as well. What some scenes lack in subtlety she makes up for with the sheer will to simply pull this all off in the first place.

Among the rest of the cast, I was thoroughly entertained by UFC Women’s Flyweight Champ Valentina “Bullet” Shevchenko, who makes for a worthy opponent as Lady Killer, and the sheer all-pro presence of the wonderful Stephen McKinley Henderson as Pops, the steady voice of experience as she trains.

Production wise Berry put herself in good hands with the expert editing of Jacob Craycroft and Terilyn Shropshire, as well as sharp lensing from Frank G. Demarco and Joshua Reis. Nine producers and 12 executive producers are credited, so apparently it took a village to get this on the screen. Berry fans should be happy. Check out my video review with scenes from the film at the link above.

Do you plan to see Bruised? Let us know what you think.