Continue to Deadline SKIP AD
You will be redirected back to your article in seconds
Skip to main content
October 15, 2020 11:00am
1Comments 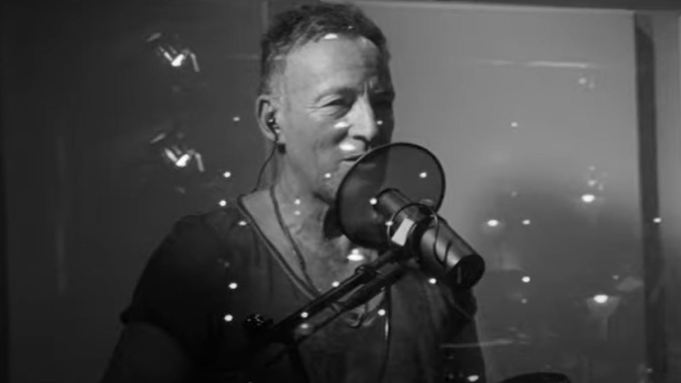 “All right, what can I say”? the Boss tells his band. “The greatest thrill of my life is standing behind that microphone with you guys behind me. Let’s do it.”

Bruce Springsteen is back with a new record — and a new movie. AppleTV+ followed the disc’s recording and will release the vérité-style documentary Bruce Springsteen’s Letter to You next week. Watch the first trailer above, and see the key art below.

Letter to You, which streets on October 23 — the same day the docu begins streaming on Apple — is the Rock and Roll Hall of Famer’s 20th album and his first with the E Street Band since 2014’s High Hopes. The feature-length film captures the sessions and includes final-take performances of 10 originals from the new LP.

It features full performances from the E Street Band — Roy Bittan, Nils Lofgren, Patti Scialfa, Garry Tallent, Stevie Van Zandt, Max Weinberg, Charlie Giordano and Jake Clemons — in-studio footage, unseen archival material and a deeper look into Letter to You from the singer-songwriter himself. Written by Springsteen and directed by his frequent collaborator Thom Zimny, the film is a tribute to the E Street Band, to rock music itself and to the role it has played in Springsteen’s life.