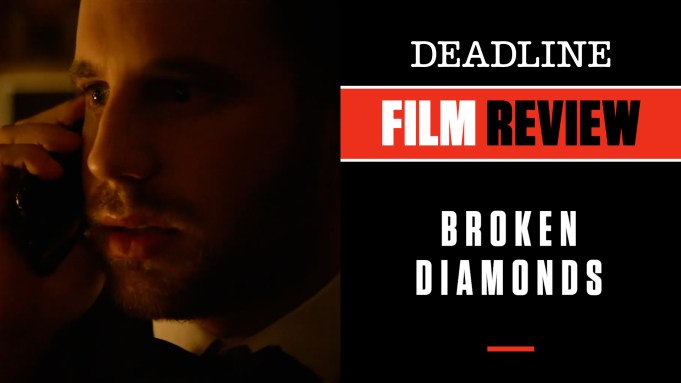 If there was any question Ben Platt is the real deal, the Dear Evan Hansen Tony winner and star of Netflix’s quirky The Politician, proves he has the acting chops to stand next to the best of his generation in the new indie dramedy, Broken Diamonds.

In the film inspired by the real-life experience of its screenwriter Steve Waverly, Platt plays Scott Weaver, who, like Waverly, was an aspiring writer moving to Paris to live out his dreams. With the day quickly coming for his trip, we meet Scott as he intently listens to French lessons in his car. Unfortunately, life gets in the way when he gets word from his stepmother, Cookie (Yvette Nicole Brown), that his father has died. Before removing the body she wants to give Scott and his sister, Cindy (Lola Kirke), the opportunity to say goodbye.

After picking up his sister, we see that she isn’t not exactly a normal sibling but more than a little “off.” She suffers from schizophrenia, and that mental illness always has been something her brother has tried to put in the background. But now with his dad’s death, it is up to Scott to look after her well-being, and that includes moving into his apartment and away from the not-so-cool housing she has been living in.

As he is determined not to let all this crash his dreams and his sojourn to the City of Lights, he quickly tries to get her settled and even find a job so she can take care of herself. Not an easy task, as her mental state keeps getting in the way of filling out job applications and going on interviews, which is why her brother makes sure he is there for support, and to assure potential employers she is the right one for them. In another key scene she runs into an old high school rival (Debs Howard) and ends up taking Scott with her to a party she is having, one with some other old friends. As the evening goes on, Cindy freaks out — it doesn’t go well. But through all these ordeals for him, Scott proves he is a good soul and a guy who is going to help her find her way even before he can start to find his.

Directed by Peter Sattler, Broken Diamonds walks a tightrope of tonal shifts but never makes light of mental illness or what Cindy suffers from. In fact, they have put real-life families dealing with this in the focus group Scott joins. One big reason this works as well as it does is the exceptional casting of Platt and Kirke, who are wholly believable as siblings. Platt runs the gamut from a guy wanting to get to a new life to someone who knows he can’t abandon family responsibilities. Kirke, best known as Hailey on Amazon’s Mozart in the Jungle, is exceptional in a role that could be a real breakout for her. She never takes the easy path but is never less than authentic. Brown also is a welcome presence.

The film comes from Black Label Media, which was responsible for the likes of Sicario: Day of the Soldado, Only the Brave, Demolition and was a key financier on La La Land. Producers are Molly Smith, Thad Luckinbill, Trent Luckinbill, Rachel Smith and Trina Wyatt. FilmRise opens it Friday in theaters. Check out my video review with scenes from the movie at the link above.

Do you plan to see Broken Diamonds? Let us know what you think.