‘America’s Most Wanted’ Returning To Fox With Elizabeth Vargas As Host
Read the full story
June 20, 2019 9:03am 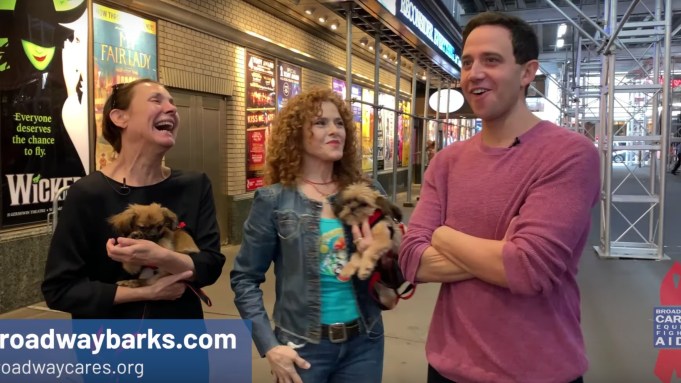 Broadway Barks, the annual pet adoption event that’s become one of the New York theater community’s more popular summertime charity activities, has been scuttled this year due to ongoing construction in Shubert Alley.

Shubert Alley, the block-long pedestrian walkway “in the heart” of the theater district, has been the longtime home of the adoption event co-founded in 1999 by Bernadette Peters and the late Mary Tyler Moore.

“It’s terribly distressing news but there’s simply no other reasonable space to hold Broadway Barks that will keep the adoptable dogs and cats safe and be accessible to the theatre fans who have made Barks so successful for 20 years,” Peters said. “We looked at lots of options and other dates, but there was no available alternative for this summer that would work.”

In a video announcing the cancellation, Peters is joined by Laurie Metcalf and Tootsie‘s Santino Fontana to direct viewers to broadwaybarks.com and/or broadwaycares.org in lieu of the annual event. Broadway Barks had been scheduled for Saturday, July 13.

The annual event, produced by Broadway Cares/Equity Fights AIDS, will return in July 2020.

Broadway Barks, typically attended by numerous Broadway stars and considered the city’s premiere animal adoption event, benefits New York City animal shelters and rescue groups. Since its start in 1999, the event has featured more than 2,000 cats and dogs, with about 85% of the pets finding permanent homes, according to the organization.

Check out Peters, Metcalf and Fontana in the video above for more information.