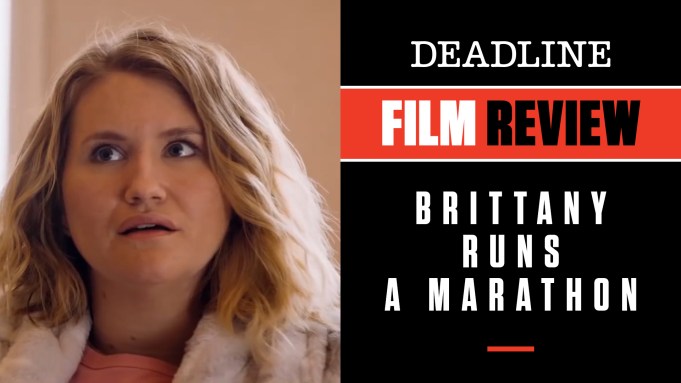 Brittany Runs a Marathon — one of the big hits at this year’s Sundance Film Festival, which got a top price from Amazon Studios for its distribution — proves to be a real crowd pleaser as well as a certain star-making performance for Jillian Bell in the title role.

Paul Downs Colaizzo makes his feature writing-directing debut with a story close to his heart. It is (loosely) inspired by his friend and former roommate Brittany, who decided that in order to fix her somewhat messed-up life she would turn it around, and ultimately did so by training and running in the NYC Marathon. Colaizzo runs with that premise runs himself in telling the story of a young woman whose life has been spiraling out of her control and who finally realizes the need to do something about it. Her first answer is to visit a doctor and get a prescription for Adderall. Taking one look at her the doc has other advice: to get her off her hard-partying ways and on to a healthier lifestyle. Eventually that takes hold and causes Brittany to start slowly taking one step, one block at a time in changing things up.

Before long, with the encouragement of friends like Catherine (Michaela Watkins) and Seth (played with lots of verve by Micah Stock), she forges a path toward the impossible: a run in the NYC Marathon — something thought unthinkable in her case. That is the basic premise here as we get to know Brittany Forgler (not the real-life inspiration’s last name) and various people in her life as she heads toward the life-changing moment.

Colaizzo also got to show the moment of truth during the actual marathon, a first for this narrative kind of movie, managing to weave Bell into the action of the beginning, middle and end of the day. Many of those onlookers and other runners are the real deal, believing this cinematic Brittany is just one of them. In a way she was as Bell threw everything into training for this role in order to make it completely believable, and that she does.

Standouts among the rest of the cast are Utkarsh Ambudkar (Pitch Perfect) as Jern, adding a romantic interest to the proceedings; Lil Rel Howery as Demetrius, a brother-in-law and surrogate father figure; and Alice Lee as Gretchen, a roommate who does not seem to get this new turn in Brittany’s life but tries anyway, no matter how vapid she seems. Stock and Watkins also are terrific; the latter recently co-starred with Bell in Lynn Shelton’s very funny indie, Sword of Trust. But it is Bell who takes the honors and wins our heart as a person who proves it is never too late to do something good for yourself, no matter how high a mountain it is to climb.

Colaizzo, a Nw York playwright, makes a fine film debut, balancing the laughs and real-life roadblocks perfectly. Producers are Margot Hand, Tobey Maguire and Matthew Plouffe. Amazon opens it in limited release Friday, before going wider next month. Check out my video review above with scenes from the film.

Do you plan to see Brittany Runs a Marathon? Let us know what you think.