Continue to Deadline SKIP AD
You will be redirected back to your article in seconds
Skip to main content
January 28, 2019 3:11pm 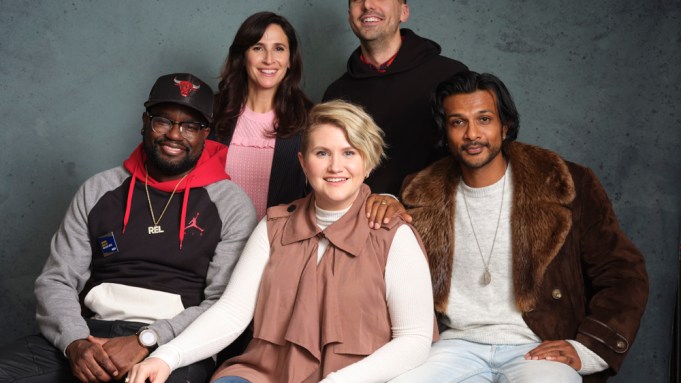 Based on the cast, Brittany Runs a Marathon seems like it would be a comedy, but when writer-director Paul Downs Colaizzo and stars Jillian Bell, Lil Rel Howery, Utkarsh Ambudkar, and Michaela Watkins came to the Deadline Studio at Sundance to talk about the film it leans more drama than comedy.

The film, which premiered today at Sundance, is based on Colaizzo’s real-life best friend and roommate from his twenties. “I watched her take control of her life around when she wasn’t content,” he says. “The discovery of change was inspiring, difficult, dramatic, and I wanted the world to be as proud of her as I was.”

In the film, Bell plays the titular Brittany Forgler who is currently living a messy life of trashy nightclub adventures and early-morning walks of shame make her late for work every day. After she visits a doctor, she learnes that she has a laundry list of diagnoses. Suddenly forced to get a grip, Brittany laces up her Converse sneakers and runs one sweaty block. The next day, she runs two. Soon she runs a mile and from there she begins to gain some direction and perspective.

“I really related to her too much,” admits Bell. “Her struggles, what she goes through physically — it was challenge.”

Bell says that she wanted to go through Brittany’s physical journey on her own so she lost 40 pounds, learned how to run, and trained. “The movie changed my life,” she adds. “I saw myself in her…it would be so easy for others to see themselves in her through her journey.”

For Howery, he got involved because it was a beautiful story. “I remember tearing up at some point,” he says about the script. “This film is needed now because of the heart.”

Watkins says that Bell called her about the script and told her the story with such emotion that it gave her chills. For Ambudkar, he went the traditional route and auditioned for the role.

“I didn’t think I would get the role,” says Ambudkar. “Typically, as a South Asian actor, these types of roles don’t go to us.” After talking to Downs, he realized he went to college with him and with “Brittany.” And after reading the script, he had an emotional response and was on board.

Bell, Howery, Watkins, and Ambudkar are known for their comedic roles. Ambudkar says that “you have never seen anyone up here play these kinds of roles.”